‘I shall smoke them out,’ PM says of ‘Internet crazies’ 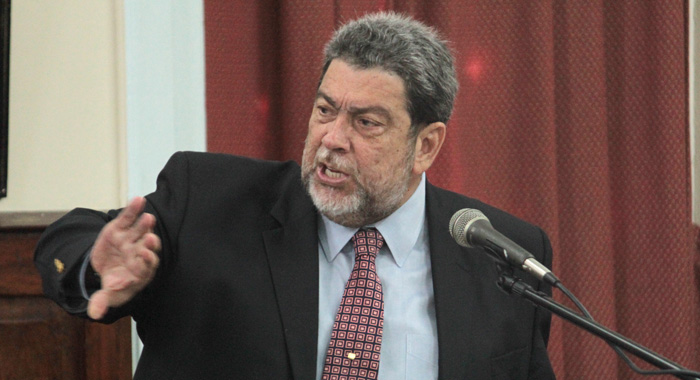 Prime Minister Ralph Gonsalves says he will use the next 18 months to smoke out the “Internet crazies” and that the media should not give them a break.

“I know them; St. Vincent and the Grenadines [is] small. So, between now and December next year, when is the election, I shall smoke them out; I shall smoke them out; everything in its good time. Of course, this press conference is going to send them mad, which is what I like to do. Send them further crazy. Real mad, mad,” Gonsalves said on Monday.

He said the expression “Internet crazies” is “a shorthand for many things”, but suggested that it groups those people who use the Internet, often anonymously, to criticise his government.

Gonsalves’ comments on Monday came days after a report in the regional media quoted digital media strategists Nerissa Golden and Ursula Barzey as saying how political parties use social media in the coming years will impact their chances at the polls come Election Day.

The criticism of the  “Internet crazies” came as Gonsalves responded to opposition to a recent official visit to Ecuador.

The Prime Minister, who is a former minister of telecommunication, said he groups together the “Internet crazies” and the opposition New Democratic Party (NDP).

“… because I want the people in St. Vincent and the Grenadines do know when they are considering voting for the NDP, they are going to consider voting a whole set of Internet crazies who are driving the agenda of the NDP…

“When people like [MP for North Leeward] Patel Matthews and [Opposition Leader] Arnhim Eustace don’t distinguish themselves from the Internet crazies and the few who hang around them and who join in the campaign against Ralph in relation to going to Ecuador, when the three [Ecuador-funded] bridges are built in North Leeward, … they must tell people   nah bother with the people who help Ralph build them bridges they man’,” Gonsalves said.

Gonsalves said that the NDP, whose popular votes have increased in every election since 2001, while his Unity Labour Party’s had fallen, doesn’t have “any connection anymore with people.

“The party which Sir James [Mitchell] left is not the party which they now have, you know. It is independent upon a few electoral elites among them hangers on and the Internet crazies,” he said.

The Prime Minister further claimed that the NDP no longer had its support base.

“The base, the real hardworking people who historically have supported the NDP, who came by way of the PPP from Ebenezer Joshua, solid honest working people, good people from the farming community, middle class, professional and the like.

“The NDP doesn’t represent those social sectors any more. They are driven by a quest for power by a handful of local people and some overseas and those who are overseas, many of them are Internet crazies. They don’t like when I use the expression. It is a shorthand for many things,” he said.

Gonsalves said some of the Internet crazies are some of his former supporters who were vying for jobs at one of the nation’s diplomatic outposts.

“When I tell them they are not suitable for them, they turn [against me]. … What they are fighting for is to move from Internet crazy to Excellency. … I see how they are lining up,” Gonsalves said.

The talks in Ecuador explore the possibility of some of that country’s citizens coming to SVG to learn English.

“You notice that all they are involved in is pulling down people. … You all in the media must not give them a break. Of course, you have to encourage freedom of expression. But it not every crack pot you give access to on a daily basis or on a weekly basis. You have to handle these things carefully and with circumspection,” Gonsalves said.

22 replies on “‘I shall smoke them out,’ PM says of ‘Internet crazies’”