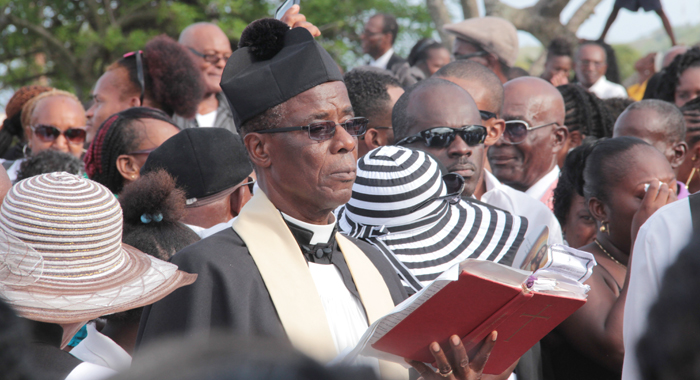 The priest that officiated at the funeral service of Elwardo “E.G.” Lynch on Saturday, was given a programme that was different from the one that other mourners received, a member of Lynch’s family has told I-Witness News.

The programme that Rev. Fr. Ulric C. Jones received listed Prime Minister Ralph Gonsalves among the persons to deliver tributes at the funeral, while the other programmes did not.

Gonsalves was booed when he entered the church and when he was called to deliver a tribute to Lynch, his former political ally, turn political rival.

Eustace said on radio on Monday that the programme he received did not list Gonsalves as one of the person to deliver a tribute.

“He was not down to speak in the programme I was given. But another programme had it, which I did not get. This thing was organized to cause as much confusion as possible and to lay blame on the New Democratic Party,” he said in reference to the criticism the leadership of the NDP received as a result of the booing.

One of Lynch’s relatives, who asked not to be identified, said the funeral programme was printed overseas.

The relative said it is not unusual for the master of ceremony to be given modified programmes if changes were made after the programme was printed.

“Mr. Eustace and Dr. Gonsalves were both informed directly and in person that they both would speak and the order in which they would do so in keeping with diplomatic protocol,” the relative said.

Amidst loud jeers and boos, Gonsalves extended condolences to Lynch family and announced that he would publish his tribute at an appropriate time.

He broadcast the tribute on Star FM Saturday afternoon.