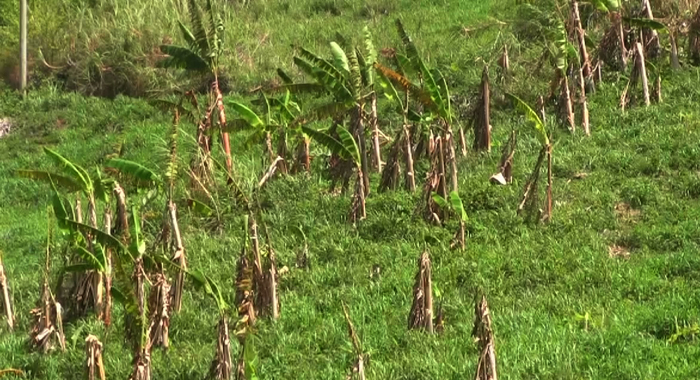 Many farms were severely affected by the drought.

A recent evaluation conducted by the Ministry of Agriculture has found that the communities from Peruvian Vale to Fancy were most severely impacted by the drought earlier this year.

Agriculture Officer Leroy Jackson explained that the dry spell lasted longer than expected and has taken a toll on the communities of region three, which includes District 6 — Peruvian Vale to San Souci; District 7 — San Souci to Byera; and District 8 — Byera to Fancy.

Jackson said that in some cases root crops subsided underground becuase of the heat, while bananas and plantains were unable to be carried to full term.

He said that along with livestock and crop production, vegetables also suffered a similar fate.

Jackson, who is also the Region 3 Agriculture Supervisor, outlined that the Ministry of Agriculture will be making available to farmers seedlings and plantlets from their various nurseries in efforts to rebuild the agricultural sector.

Farmers are being encouraged to take advantage of the government’s $6 million dollar credit programme, which is available through the Farmers Support Company (FSC).

And, farmer Stanley Thomas said that like many other farmers, he has seen firsthand the effects of the drought.

Thomas explained that the usual quantity of sweet peppers, potatoes, cabbages and cucumbers reaped has significantly decreased as a result of the drought.

“I’m not even able to get the yield that I normally get and it’s very difficult to farm in these conditions,” Thomas said.

One reply on “Agriculture Ministry evaluates impact of drought”