Luxury car to be given away in Hairoun game show today 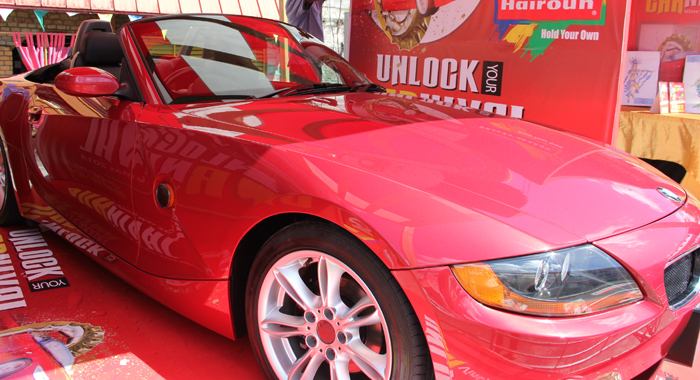 One lucky person will become owner of this BWM Z4 tonight. (IWN photo)

Ten individuals will this evening get a chance to win prizes ranging from a BMW Z4 to an ironing board in the finals of the Hairoun Beer “Unlock your CARnival” promotion.

The finals will be held at Solidarity Car Park in Kingstown, in the form of a live game show, and will also include music and live performances.

“In addition to the draw, we have a fun-filled night on Friday. We will have entrainment by local acts such as Madskull, Fireman Hooper, Hairoun Hit Squad and our MC for the night will be, of course, Candy Man, to give us entertainment all night…

“We have a night filled with entertainment on Friday. We have some of the best DJs that St. Vincent has. They will be there providing sound,” London-Williams said.

She explained that at the finals, there will be two doors with rotating prizes behind them.

Each finalist picks a random key every 30 minutes and they all try one door (the same door).

One key will open one of the doors, and the person whose key opens the door walks away with whatever is behind the door and the others continue to the other draws.

“In the end, there will be two doors and two persons, and those two doors will be opened simultaneously, and whatever is behind the door, the persons whose key unlocks the door, will win that prize.”

The prizes include a trip for two to Crop Over, a room of cash, a truckload of Hairoun beer, a man cave and, the BMW Z4, a tricycle, a pot set, an ironing board, a teddy bear, a LIME 4G handset and credit.

“So, it all depends on luck and chance. We hold our breaths on Friday to see who will open the doors with the BMW Z4 behind it.”

All the other prizes must be eliminated before the car.

“So, you are not going to win the BMW in the round prior to round 9,” she said.

Six persons had images of doors under their Hairoun beer crowns, and a further four were randomly selected from envelopes containing six “Hold Your Own” crowns with the name and telephone number of the consumer.

Journalist Kenville Horne assisted in the random selection of the other four finalists.

The “Unlock Your CAR-nival” promotion was launched on May 23 at the Heritage Square.