NDP will no longer cooperate with ULP gov’t 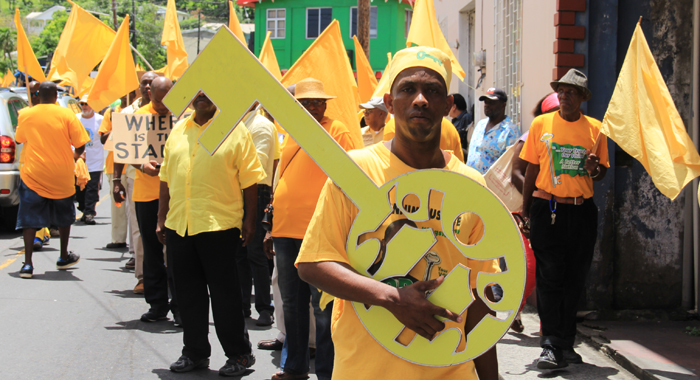 The opposition New Democratic Party (NDP) announced on Thursday that it will no longer co-operate with the Ralph Gonsalves Unity Labour Party (ULP) government until general elections, constitutionally due in December 2015, are called.

“From here on, with a one-seat majority, Ralph, the New Democratic Party is not co-operating with you on anything, save and except for the next general elections,” MP for Central Kingstown, St. Clair Leacock told an NDP rally in Kingstown.

“So if you want our support in any activity, in any action, and for any decision you make, ring the bell, call the election, relieve yourself from your misery, and bring back good governance to this country, and bring back the New Democratic party, bring back Eustace into prime ministership of St. Vincent and the Grenadines,” said Leacock, who is also an NDP vice-president.

The rally came at the end of the party’s “Ring De Bell” protest march against the Gonsalves government’s handling of the nation’s affairs.

Persons carried placard highlighting a number of issues, including their inability to buy schoolbooks, pay their utility bills, and the state of agricultural sector.

“I brought you on the street today, and I have to tell you, I have a case against the government,” Leacock said.

“The ULP, before they came into government, said that they … would be hard on crime. It is not my problem today that crime is hard on the ULP,” he said.

Leacock carried up a bag, which he said contained the Director of Audits reports from 2004 to 2010.

Leacock reiterated that he only has the audit report up to 2010.

“So you have to add four years of crime to what I am talking about to get up to speed, including the Registrar, of course,” he said.

‘time for a change’

“I am not saying so out of a sense of wanting to be the prime minister. I am saying so as a Vincentian who sees the decline, the failings, the suffering of our people,” said Eustace, who was prime minister for the five months ending March 2001, when the NDP was voted out of office after 17 years.

“After 13 years of Ralph Gonsalves, after his contempt shown for the people of this country, I know that he has to go,” the former finance minister said.

“But in addition to that, I know that those of us who are on the platform of the NDP have the skills and the experience to guide this country forward and take it out of the mess that is in now. I am confident about that, and I give you the promise today, that Arnhim Eustace and the rest of the team will bring back prosperity to St. Vincent and the Grenadines,” Eustace said.

‘not even one pity vote’

And, Nick Francis, president of the Young Democrats, the youth arm of the NDP, spoke specifically to young Vincentians.

“To that single mother who looks in the face of her hungry children, to that young man who feels he has to sell something illegal to get by, the NDP hears your cry today, and we know that unemployment is the biggest problem among our young people in St. Vincent and the Grenadines, and the ULP has failed to provide the jobs and the opportunities for our young people to get a better head in life,” he said.

“What a failure they have been for the young people and our generation in this country,” he said of the ULP, which came to office in March 2001.

Francis said that Prime Minister Gonsalves went to the Central Leeward town of Barrouallie and asked the young people to give him a fourth term in office.

“Well, I have a message for the Comrade today: not even one pity vote you getting! Not even on pity vote! Because when the young people hit the polls, is only one thing we voting, it’s NDP, NDP; NDP again and again,” Francis said.

‘from beggar days to better days’

“‘Destruction of the poor is his poverty. …/ Destruction of your soul is vanity,’” Lauron Baptiste, the NDP’s candidate for North Windward said, quoting lyrics from Jamaican artiste Buju Banton’s song, “Destiny”.

“Today, the choice that you will make, or are about to make, is going to affect your life for the better or for the worst. So, the choice is clear, ladies and gentlemen,” he said, and encourage persons to vote for the NDP, saying the party will form the next government in SVG.

He said the ULP government wants citizens to go to them for everything.

He said the NDP “will build a new economy in this country — one that is growing.

“We want to move this country from beggar days to better days,” said Baptiste, an agriculturalist.

Meanwhile, NDP spokesperson on agriculture, MP for North Leeward, Roland Matthews, told the rally that his party is committed to making things better for the poor and the farmers.

“… this Unity Labour Party government, headed by Ralph Gonsalves, has killed agriculture and has destroyed banana in St. Vincent and the Grenadines,” he said.

He told the rally that while the Ministry of Agriculture knew in 2009 that black sigatoka was coming, and had a plan, the ministry did not have the resources to manage the disease, which causes the leaves of the banana tree to wilt and fruits to ripen prematurely.

“As a result, the banana industry in this country suffered, and suffered tremendously,” Matthews said.

He said the NDP has gone through all the agricultural districts and met with farmers.

“And based on what you told us, we have come to an agreement in this NDP,” he said, an announced that the party will convert to a grant the EC$6 million that the ULP government lent to farmers.

He further said there is too much corruption in SVG.

“Something is definitely wrong in this country, as if we are going through a blight. And if things are so wrong, I have news for you that the New Democratic Party, we are the silver lining behind the dark cloud and we are going to make things better.

“We are going to put St. Vincent and the Grenadines on a new level, with the Honourable Arnhim Ulric Eustace in charge of business,” Matthews said, and described Eustace as “a man of integrity, a man of great leadership ability.

“He has what it takes to move SVG forward. We are not saying that we have the solution to everything, but come on, people, things can’t get worst than it is today.

Matthews said citizens have an opportunity “to show this country that you are a Vincentian to the bone.

“You have to say to you neighbour that you are fed up of the foolishness,” he said.

And, MP for West Kingstown, Daniel Cummings told the rally that only a small portion of the iceberg that caused the Titanic to sink was above water.

“It’s the massive island of ice that was below the water that wrecked the ship. I want you to think of how secretive this government is. And if we can unearth so much corruption among the senior members of government in this country, you can only imagine what they are pushing under the rug,” Cummings said.

“That is why no money in this country. It’s thieving left, right and centre. What we seeing … is only a small fragment of the reality,” Cummings said.

He, however, said that an NDP government will not have any commission of inquiry into corruption.

“Mark my word, they going straight to meet whoever in charge of the prison; once we get the evidence, straight before the court,” Cummings said.