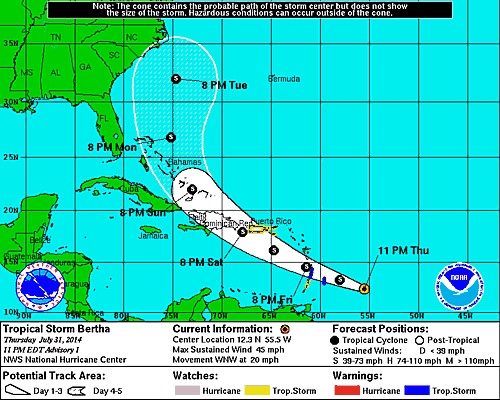 The tropical storm watch for St. Vincent and the Grenadines (SVG) has been discontinued, the National Emergency Management Organisation (NEMO) has announced.

“With its present location, movement, and the location of the deepest convection which remains concentrated in the north east of the system, Tropical Storm Bertha will not directly impact Saint Vincent and the Grenadines,” the SVG Meteorological Office said in an update.

“However, feeder bands associated with this system are spreading across the island chain and showers and thunderstorm are likely to occur,” it further said and urged residence in areas prone to flood or landslides to exercise caution and remain on the alert.

“In addition, sea swells are still expected to reach as high as three meters (10ft). Therefore a small craft warning is in effect for above normal sea swells,” the Met Office said, adding that the   advisory was the final one it would issue on Tropical Storm Bertha.

The Met Office said that at

“Tropical Storm Bertha is moving towards the west north-west at 21 mp/h (33 km/h) and this general motion is expected to continue in the next 24 hours,” the Met Office said.

Tropical storm force winds extended outwards up to 115 miles (185km) mainly to the north east of the centre.