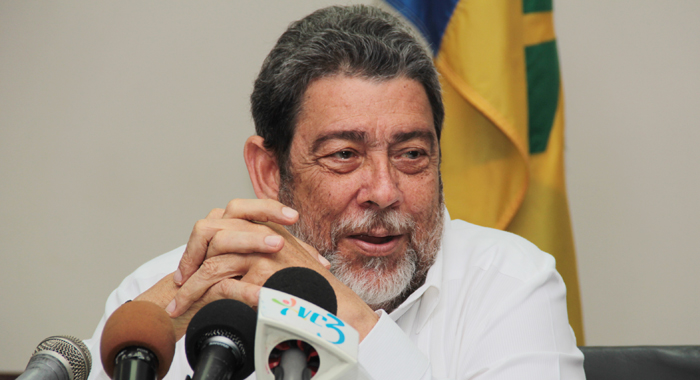 St. Vincent and the Grenadines remains opposed to an economic citizenship programme even as St. Lucia became the latest Organisation of Eastern Caribbean States (OECS) country to express interest in the initiative.

“It is my view that economic citizenship is a superficially attractive option,” Prime Minister Ralph Gonsalves told a press conference on Monday.

“To me, The downside outweighs whatever money you can collect, the downside being whatever problems you may have, dealing with due diligence.

“I want to also indicate that in the   OECS or the Caribbean, once you have one country already which has taken the lead, others which are coming are unlikely to be able to get the kind of results,” he further said.

Prime Minister of St. Lucia, Kenny Anthony last month reported significant interest across the globe since Castries announced in March that it would be exploring possible introduction of an economic citizenship programme.

Gonsalves said St. Kitts and Nevis has  “jumped the queue”, having had an economic citizenship programme for years.

Antigua and Barbuda and Dominica also have economic citizenship programmes.

Gonsalves, however, said that apart from the practical questions relating to due diligence, he also has “a fundamental, philosophical objection to economic citizenship…

“I maintain that the highest office in the land is that of citizen. What binds us together is the bonds of citizenship, community of spirit with one another, and the accepted forms of citizenship, to me, are appropriate to our circumstances,” Gonsalves said.

He noted that currently persons become Vincentians through birth, descent, marriage to a Vincentian, naturalisation, and under a provision where someone has had a connection to the country for five years and has made a significant economic, social or cultural development to the country and is of sound character, understand what it means to be a citizen, and can write and speak the English language with a certain level of proficiency.

Gonsalves, defended his granting of citizenship to businessman Dave Ames of Buccament Bay Resort, saying this was not an economic citizenship.

Gonsalves, who has ministerial responsibility for citizenship, said the citizenship granted to these investors is not economic citizenship, because they were required to have a commitment to the country for several years up front and then consideration was given for citizenship.

The Prime Minister further said he has his doubts about the extent to which due diligence can be conducted under an economic citizenship programme.

“But if you have a flood of applications, as you have in some jurisdictions for citizenship, you tell me you are doing the due diligence, I only smile, because I know you are going to get caught with several,” Gonsalves said.

“This is why in some jurisdictions you have all these complaints being made about this or that persons being associated with this or that criminal enterprise and so on and do forth,” he further said.

“For me, citizenship is not a commodity for sale, and the passport, which is a manifestation of the citizenship, what I call the outward sign of the inward grace of citizenship, is also not for sale.

“Now, that is my position, that is the position of the government of St. Vincent and the Grenadines.