Crosswind at Argyle airport not ‘very dangerous or worrying’ 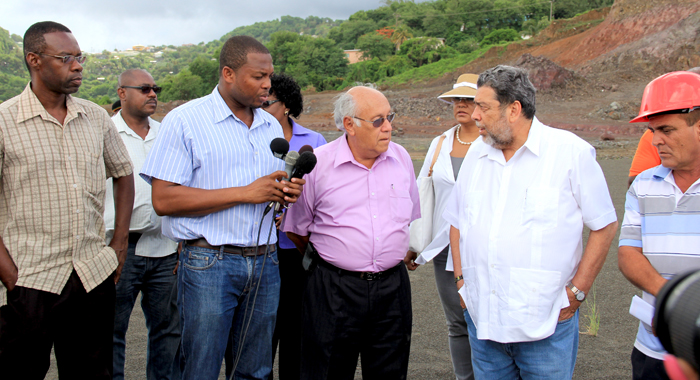 A Cuban expert working on the construction of the Argyle International Airport says the wind conditions there are not very different from other Caribbean nations.

There have been concerns that Argyle is not suitable for the construction of an airport, because of the incessant strong winds.

The EC$700 million international airport is scheduled to be completed by the end of this year, and to become operations

The government has said that if needed, a cross-wind runway will be built to accommodate smaller aircraft more like to be affected by the winds during landing and take off.

“I want to say from my experience that the wind condition here is not very different from what you will find in other Caribbean condition. And the wind is not always along the predominant direction; it will vary,” Cuban engineer, Leonardo Perez said, speaking through Vincentian interpreter Aluka Dublin on Thursday.

Perez explained the situation during a visit of the Cabinet and the media to the airport construction site.

“When you study the placement of an airport, the first thing you have to take into consideration is the wind studies. And second, you have to study the terrain. It could be that the optimum direction orientation is east-west, but then you will do the study of the terrain and it might be impossible to place the runway in that direction.

“Sometime ago, we have discussion with the airplane operators in St. Vincent and we asked them if they thought it would be necessarily to construct a cross-wind runway. And what they said was that if we were to build a crosswind runway, that will take them into the hills and it would be better to build a runway that is longer, so that they can approach and make the necessary corrections. It would be safer for them to land at this one,” Perez further explained.

“But the most convincing information we have is the results we have had so far from the wind studies, because the crosswind component affecting the runway is not serious.”

The Ralph Gonsalves government has been criticised for not completing winds studies before construction the airport.

Prime Minister Ralph Gonsalves has said that wind studies can take almost a decade to complete.

The studies are being done simultaneously with construction of the airport.