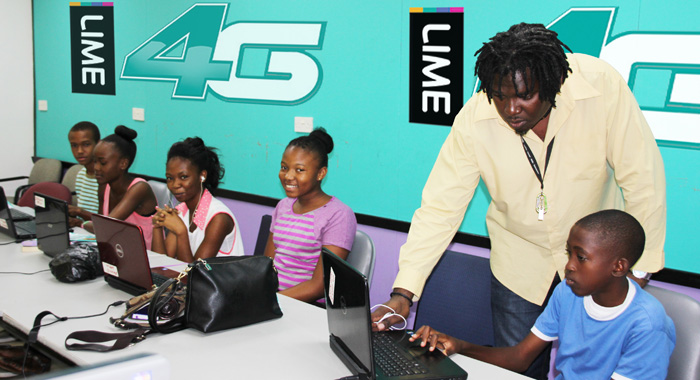 IT consultant Ovid Burke and participants in the LIME Internet Summer School.

Participants at the 2014 LIME Internet Summer School said they had a blast at this year’s programme, which saw more than 145 youngsters gaining knowledge in information technology.

As the curtains came down on the 11th annual programme, the youngsters gathered at the LIME base in Arnos Vale on Friday, said they were glad that they were able to learn about digital safety, Internet safety and web page design, among the many other areas covered during the three-week course.

General Manager of LIME, Leslie Jack said, “We are quite pleased to have Frank B Armstrong and Courts St. Vincent Ltd. on board with us this year. As LIME continues to make its impact on education in St. Vincent and the Grenadines, Internet Summer School will continue to be on LIME’s annual agenda.”

Ovid Burke, the facilitator of the LIME Internet Summer School for the past 10 years, agreed that the information given by him and the other facilitators was well received, and believes that some IT careers were inspired and that this country’s future in IT was on sound footing.

“The response of the students was very good. I think all age groups were very enthusiastic and very responsive to the information that was given to them,” Burke said of the youngsters, ages 7 to 18 years old.

“They responded very well and were very active and very participative in all the discussions and in this final week where we had some older teens they performed creditably in terms of creating their own web pages and we definitely saw some creativity coming out of that group.

“Being a web designer myself, I was very excited by what we saw. I think we do have some talent that would be coming out of LIME Internet Summer School, and I think it bodes well for the future of IT services in St Vincent and the Grenadines.”

LIME Internet Summer School continues to grow in leaps and bounds, with six different workshops taking place in the three-week course. Students were accommodated in the morning and a new batch in the afternoon.

This year, two of Burke’s assistants are products of the LIME Internet Summer School.  Cenus Hinds and Rotasha Medford got their feet wet at a similar workshop, and are now using their skills and knowledge acquired over the years to impart information on this year’s participants.