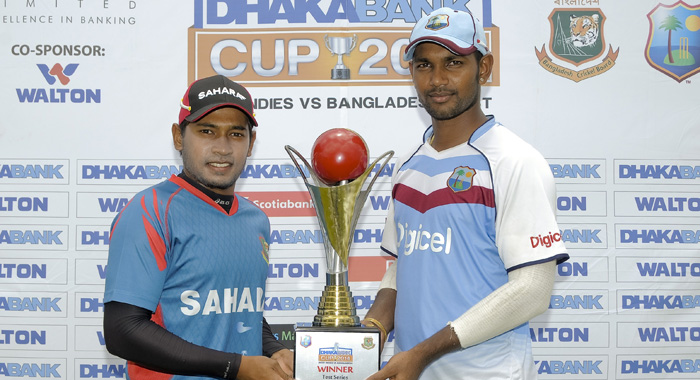 Caribbean cricket fans and especially those in St. Vincent will be hoping for a dominant performance from their home team, West Indies, against test strugglers, Bangladesh, in the two-test Dhaka Bank series, the first of which gets going today at the Arnos Vale Playing Field — the third test at the venue.

Since being elevated to a test playing nation in 2000, the Asian team has found it extremely tough to justify their status. In the 83 tests they have played so far, they have lost 68, won 4 and drawn 11.

In the 10 matches between the countries, the West Indies have won 6, lost 2, with 2 matches being drawn.

The home team, a under new captain, Denesh Ramdhin, are on a “hiding to nothing”, so are expected to win the series on the trot to erase memories of the visitors’ 2-0 triumph on their 2009 tour of the Caribbean.

Back then, the WICB and the West Indies Players Association were going through another in a series of confrontations which disrupted the game at both the regional and international levels.

That time, the disagreement over contracts and payments saw the top players withdrawing their service forcing the West indies selectors to pick a second tier team under the captaincy of St. Lucia’s Darren Sammy who had played less than 10 test at the time. In fact, the all-rounder had played 8 tests and 41 ODIs.

Not given a chance against a full strength West Indies team before the start of the tour, the Bangladeshis gleefully accepted the chance to play against the weakened unit and did so with historical consequences.

They won the series 2-0 — the first time they had won two matches in a series; their first series success, and first win against one of the traditional test playing nations.

Five years before they had earned a draw against a full strength Caribbean side without the help of the weather and will be looking to that kind of performance to see them through what is expected to be a tough test.

Their task, already great, is compounded by the absence of their best player, Shakib Al Hasan. Shakib is currently ranked number one in the world as a test all-rounder. In 2009 he scored an unbeaten 96 in helping them to chase down 215 for a 4-wicket win in Grenada, while in the last home series looked set for centuries on two occasions, but succumbed to loose shots with the milestones at his mercies.  While Shakib’s batting at number six has been excellent when he shows the commitment, his left-arm orthodox bowling could be seen as even more of a loss when looking at the history of Caribbean batsmen against quality spinners on slow pitches. And indications are that the Arnos Vale strip, which has been starved of sunshine over the last few days, could be such a pitch.

Those who would have been admirable replacements are not in serious contention since off-spinner Sohag Gazi, who has met with some success since making his debut two years ago, had his action reported by the umpires during the second One-day International (ODI) in Grenada.

And questions are being raised over the fitness of his replacement, Elias Sunny, for the today’s first Test.

The side’s new ball attack, though not good enough to set the world on fire, has shown some promise with the nippy Al-Amin Hossain causing the West Indies top order some discomfort in the One Day series, which the hometeam won 3-0.

Analysts are of the view that, obviously some way short in the bowling department, captain Mushfiqur Rahim and his team’s possible saviour appears more in the batting with most of the batters turning in at least one good score and occupying the crease in the ODI series and the warm up match against St. Kitts.

In the three-day practice match in St Kitts, Rahim and Nasir Hossain compiled hundreds. The management will be hoping that this form will continue in the test match with additional contributions from the pugnacious Tamim Iqbal, Mominul Haque, Anamul Haque and Imrul Kayes.

The West Indies for their part were dealt a double blow on the eve of the series when key players, mystery spinner Sunil Narine and experienced all-rounder Dwayne Bravo made themselves unavailable owing to their T20 Champions League commitments.

Narine heads off to be with the Kolkota Knight Riders while Bravo is with the Chennai Super Kings. Their absence is tempered by the presence of the big hitting Chris Gayle, the talented Darren Bravo and the man known across the world as “Tiger”, 40-year-old Shivnarine Chanderpaul.

He gave an indication of his hunger by hitting 183 for St. Kitts for whom he appeared as a guest player against Bangladesh this week.

While sweeping the ODI series 3-0, the West Indies will probably be somewhat concerned with the form of Gayle, whose run-scoring has been staccato since suffering a back injury just over a year ago.

In the bowling department, Kemar Roach, the sole surviving member of the 2009 team, seems to be finding his feet after being away from the game following a shoulder injury, while the rejuvenated Jerome Taylor and the fast improving and impressive Jason Holder will share the new ball while beanpole left-arm spinner Suleiman Benn is expected to be slotted in the space left by Narine in a combination to take 20 wickets.

While they go into the game as clear favourites, the West Indies players and Caribbean fans will still have nightmares over Kenya’s shock win over the Brian Lara-led team in the 1996 Cricket World Cup.

The forecast is for some showers during the match but the WICB and the local cricket association will be hoping that the disruptions will not be as bad as those in the inaugural test in June 1997 against Sri Lanka, when rain wiped out more than a day and a half over the five days.

It is the first time that a test series is being played in the last quarter of the year and in the heart of the Hurricane season, and, based on reports, this has left cricket administrators more than a little nervous.

One reply on “Windies looking to maintain dominance over Bangladesh”