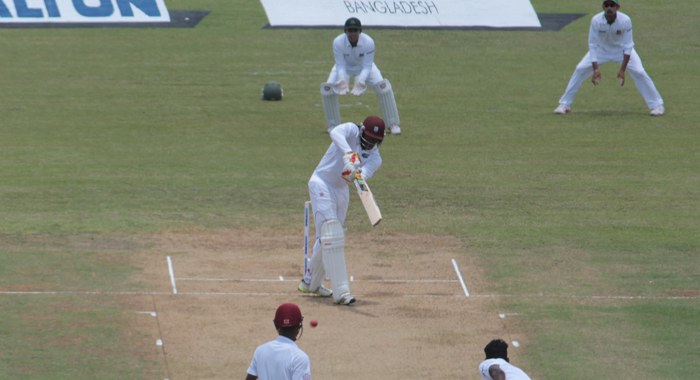 Chris was unbeaten on 61 at lunch. (IWN photo)

Openers Chris Gayle and Kraigg Brathwaite batted confidently against Bangladesh to take the West Indies to 103 without loss at lunch on the opening day of the first Dhaka Bank test series at the Arnos Vale Playing Field.

Gayle, who started somewhat shakily, was unbeaten on 61 and Brathwaite on 40, giving the Windies the type of start they would have been hoping for in good bating conditions after losing the toss.

Gayle, whose form coming into the test was not of the best, overcame some early anxious moments when he played and missed on a few occasions. He, however, settled and set about building the foundation for a long innings and looked ominously at ease at the interval. So far, he has struck 10 fours and a solitary six in his 83-ball stay at the crease. The solitary 6 struck over the midwicket boundary off debutant left arm spinner Taijul Islam saw him to his half century. He was given a life on 52 when medium pacer Rubel Hossain failed to hold onto a return catch.

Brathwaite has been his usual watchful self in playing the supporting role, but has not passed up the opportunity to put away the bad balls. He has struck 4 fours from the 90 balls he has faced so far.

The mixed Bangladesh attack has found little of what they were expecting when they chose to field. The ball, after the early stages, has done little for the pacers but Islam has found some bounce and turn on occasions though not enough to cause the batsmen any undue worry.

Earlier the West indies had omitted Jason Holder and kept burly pacer, Shanon Gabriel from their final 11, while Bangladesh had given a debut to left-arm spinner Taijul Islam.

A total of 29 overs were bowled in the session, which was disrupted for five minutes by a sharp shower just on the hour.

One reply on “Openers give West Indies upper hand at lunch”