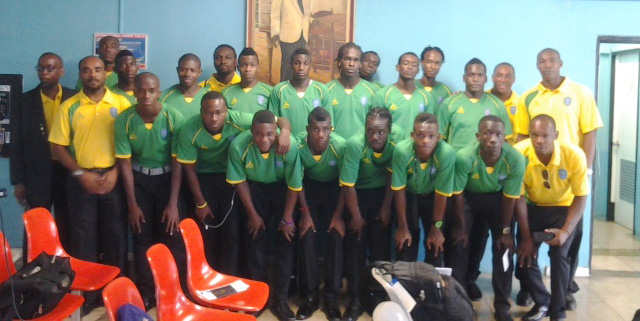 JOHN’S, Antigua — The Antigua Recreational Ground is better known as the place where one of the greatest batsman ever, Brian Charles Lara, made his double world records, but Sunday night was another record night in the Caribbean Cup between Team SVG and Antigua.

The game, dubbed as the finals of the Caribbean Cup by supporters of the Antigua Team — Benna Boyz — began in rainy conditions with an attendance of about 5,000 persons hyped by the promotion on TV and radio.

The Benna Boyz started the first 17 minutes in control, coming at Vincy Heat towards the southern end, but after Jarrel McMaster conceded a careless foul about 25 yards out, it was left for Dwaine “Tallman” Sandy to tip a brilliant free kick over the bar as the crowd roared in style.

Vincy Heat caught Antigua on the fast break in the 19th minute with Myron “Left Eye” Samuel sliding through a nice pass to Oalex “Bounty” Anderson, who, having beaten the defender and the goalkeeper, instead of shooting, tugged his shot into the side netting after rounding the keeper.

Vincy Heat dominated the rest of the game until the 33rd minute, when Azinhno “Zinhno” Soloman should have scored in an open net after Samuel crossed an accurate free kick from 40 yards onto the head of Oalex Anderson, who guided his header onto the far post only for Zinhno to score but scuffed his shot wide.

The next five minutes belonged to Antigua as the ever-present Tallman kept Team SVG in the game with two acrobatic saves after Antigua threatened with the crowd chanting the Benna Boyz.

But in the 45th minute, Vincy Heat deservedly went ahead with a well taken one-on-one by Nazir “Naz” McBurnette after intelligent work by Myron Samuel, again taking the ball deep in midfield, eluding two tackles and skilfully putting through McBurnette who calmly put the ball in the back of the net as the spectators was silent as the whistle sounded for the end of the first half.

Antigua started the second half just as the first 15 minutes in the first half, but Team SVG’s defence was equal to the task.

Anderson had a shot parried away after a good corner by McBernette in the 51st minute but in the 57th minute the referee made a blunder and almost allowed Antigua the equalizer. The referee blew for a foul against Vincy Heat, and whilst talking to two Antiguans and two Vincentians over the foul, the Antigua played the ball whilst the four players were clearly arguing with the referee, who signalled play on, despise the players crowding him.

The striker hit the ball wide.

But in the 80th minute, Anderson was dragged to the ground by the England-based Antiguan keeper after Anderson had beaten him only for the referee to wave off the penalty claim. The whole stadium was in shock as supporters shouted at the referee. One angry supporter said, “Ref, you cheat the Vincy man them; is a clear penalty.”

Antigua finally equalised immediately after in the 82nd minute from a looping header, which Tallman could have saved front post.

The last 12 minutes for Team SVG were disastrous as they began to defend deep into their own half. The killer blow came in the 93rd minute, the last two minutes of extra time, when Antigua broke, with only Tallman to beat and the substitute player finished smartly inside the near post.

Antigua top the group with 9 points and Team SVG with 6.

They will head to Guadeloupe, along with Curacao and Martinique for the semi-final group stage in October 2014.

Team SVG, with players averaging 23 years old, has a future if they continue to show discipline and train hard.

The team played their hearts out for the last week notwithstanding injuries, a bus accident and some cases of chikungunya.

Coach Cornelius Huggins’s record is the best for any coach for SVG, having won 70 per cent of matches since taking over the role of full time coach from England-based Collin Rowe.

One reply on “Team SVG lose to Antigua in Caribbean Cup”