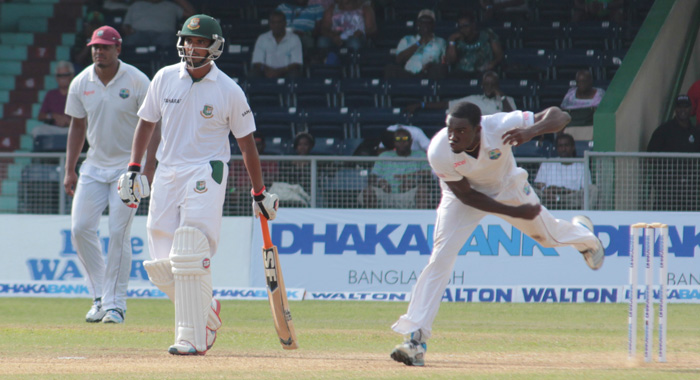 Bangladesh, behind a fifth wicket century stand between captain Mushfiqur Rahim and the out of sorts Mahmudullah, achieved the rare feat of batting the entire day of a test match when they did so against the West Indies on Monday in the first Dhaka Bank test at the Arnos Vale Playing Field in St. Vincent.

It did not look so inspiring for the visitors when they found themselves in the precarious position of 107 for 4 and memories of the first innings debacle began to surface. However, the fifth-wicket pair joined forces and added 130 runs and occupied the crease for over 50 overs (50.5) in the process.

The batting of Mushfiqur and Mahmudullah while still not good enough to offer their team the chance of avoiding their 69th test defeat, has put them in position to create a little unease and concern in the minds of Denesh Ramdhin’s men.

The evidence of the commitment shown by Bangladesh was underlined in that while they lost 4 wickets in the pre-lunch period, they batted the second session without losing a wicket while adding 80 runs. Their only loss in the four hours after lunch was Mahmdullah (66) who was brilliantly caught by Ramdhin from an inside edge diving to his left off the bowling of Kemar Roach with the score on 237/5.

He batted for 213 minutes, faced 151 balls, and struck 7 fours and 1 six — off Gayle — over the long on boundary. It was his first score over 50 for almost two years — 21 months to be exact. He reached the elusive milestone with a lovely backdrive to the cover boundary off Taylor, a shot that also brought up the century stand.

The West indies did not help their own cause with a series of dropped catches with Mushfiqur being put down on 10 by Chris Gayle at first slip and on 25 by Darren Bravo at gully.

But the missed opportunities, which appeared to stun the reasonable size crowd and his teammates, was a sitter by Kirk Edwards, when Mahmudullah, attempting to slog Gayle over midwicket, only succeeded in skying the ball to cover where the fielder running a few yards bubbled and dropped the catch.

The West Indies bowlers toiled manfully with the fast men creating enough problems for the batsmen with pace and movement but suffering because of the fielding lapses.   Roach (2/39) and Jerome Taylor (0/37) saw edges floored while the pacey Shannon Gabriel (0/19), who hit the deck hard with plenty of carry on the slow pitch, kept the batsmen honest with the short stuff.

It was beanpole left-arm spinner Suleiman Benn (2/44) with a five wicket haul in the first innings who once again created the early problems with two early wickets but Mushfiqur who was unconquered with 48 in the first innings and Mahmudullah made him work for their wicket as they played him on merit without being overcautious. Gayle (1/50) and Jermaine Blackwood (0/51) were also used by Ramdhin in an effort to get wickets but with little success while conceding over 100 runs in their 29 overs.

Bangladesh will enter the fifth and final day — something that didn’t appear likely at 110/4 at lunch on day four — with their hopes on captain Mushfiqur, who has been by far their best and most assured batsman in both innings. Mushfiqur, unbeaten on 70, has so far struck 8 fours in his almost five hours at the crease. In the process he has become the highest runscorer (1096) as a captain for his country going pass Habibul Bashir (1044).

Earlier, the West Indies as was expected, did enforced the follow on and looked on their way to a fourth day win when their opponents had stumbled in the morning session by losing four wickets.

Shamsur Rahman (4) was the first wicket to fall in the morning session when he edged Roach’s full delivery to Ramdin with the total on 11.  Imrul Kayes (25), who struck the same bowler three times to the fence, was caught at cover off Gayle after adding 69 with Tamim Igbal. The third wicket, that of Mominul Haque (12), went in controversial circumstances when the batsman for the second time in the match was given out, caught behind, reviewed the decision but had to walk as the television replays were inconclusive to have the decision overturned just as had happened in the first innings. Tamim (53), who had mixed attack with defence, struck 4 fours and 3 sixes before being bowled by Benn, attempting a big drive through the offside just before lunch.

But the efforts of Mushifiqur, who is eyeing a third test century and Mahmudullah, pointed the ship into calmer waters.

One reply on “Bangladesh take test into day five”