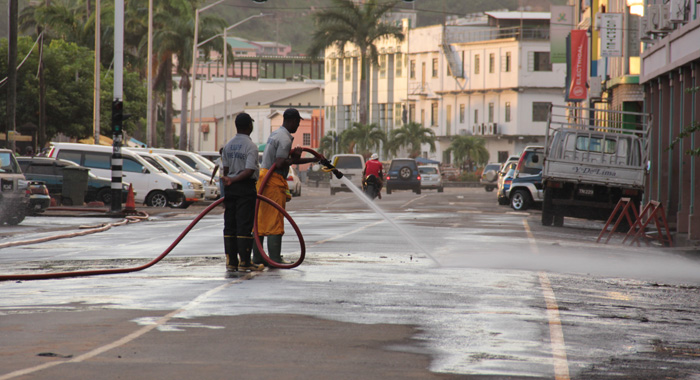 Firefighters were late Monday afternoon hosing down Kingstown to rid the city of dust after the floods on Saturday.

Some vendors complained to I-Witness News that the Kingstown Town Board had not washed down the streets, pavements and sidewalks, after the Sanitation Department on Saturday cleared the city of silt, muck, and other debris deposited by the floods.

Vendors were using surgical mask, clothing and other articles to cover their mouths and noses, and pedestrians were doing the same to protect themselves from the dust on Monday.

Related: Complaints about dust in Kingstown after floods

One vendor in Middle Street told I-Witness News around 8:45 a.m. Monday that she had paid to have water brought so that she can wash away mud from the area where she sells, and vendors were seen using buckets of water and hoses trying to clean various areas of the city.

I-Witness News was unsuccessful in its repeated attempts on Monday to reach Warden of the Kingstown Town Board, Carl Williams, but a staff member there told I-Witness News that the cleaning of the city was the responsibility of the Sanitation Department.

One reply on “Firefighters hose down dusty Kingstown”