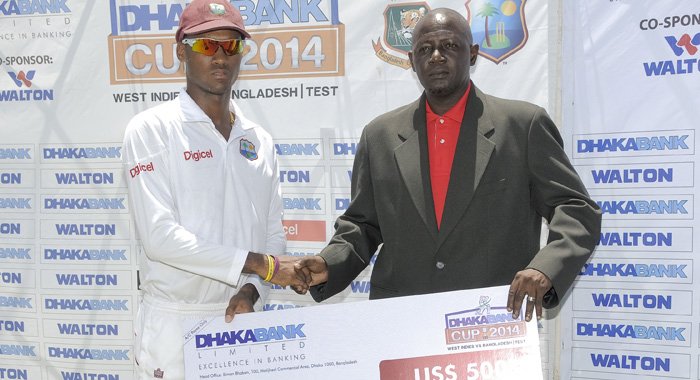 West Indies returned with a no-nonsense attitude on the fifth morning of the first Dhaka Bank test match and duly completed a 10-wicket victory over Bangladesh just before lunch at the Arnos Vale Playing Field in St. Vincent on Tuesday.

The visitors, who ended day four in a fighting position of 256/5, 46 runs adrift of the follow on target, could only add another 58 runs for the loss of the remaining 5 wickets, to be dismissed for 314.

Captain Mushfiqur Rahim (115) completed a well-deserved third test ton and was last man out trying to extend the lead.

The West Indies openers duly completed the victory by getting the required 13 in 2.4 overs with Chris Gayle on 9 and man of the match Kraigg Brathwaite on 4.

Earlier, Bangladesh who entered the fifth day hoping to continue their resurgence on Monday’s fourth day, were quickly in decline by losing 4 wickets before reaching the deficit of 302.

Fastbowler Kemar Roach, who was once again on the receiving end of some poor catching, began the day in businesslike fashion, bowling with controlled aggression in search of quick wickets.

He broke the 42-run sixth stand between Mushfiqur and Nasir Hossain (19) with 23 runs added to the overnight total. Hossain, who had joined his captain to play out the last hour of final session on the afternoon of day four, got a short ball from Roach and attempting to change his mind from the pull shot, only succeeded in lobbing the ball to mid-on, where Shannon Gabriel took a running catch.

Rahim then moved into the 90s with 3 exquisite shots off the lacklustre Jerome Taylor — cutting to third-man, then driving on the up with flair and panache to the cover boundary before flicking him neatly to the unprotected fine leg boundary. After that batting showcase, Rahim then stood at the other end as the West Indies pace men cut through his side’s lower order as 3 wickets went down for one run in a three overs.

Roach trapped Shuvagata Hom (0) — a decision the batsman reviewed with no success — with the total on 291/7 and with a single added, Gabriel then yorked Taijul Islam (0) and forced Rubel Hossain (0), who showed little inclination to get behind the line to play on.

In between the carnage, Rahim, sighting the possibility of being left high and dry in the 90s, then went on the attack first by launching Roach over the long off boundary to bring up his century. He then edged at catchable height off Gabriel between a static Gayle at first slip and wicketkeeper Ramdhin to the third-man boundary. He was caught at long on by Darren Bravo — his sixth catch of the match — trying to loft Roach (4/64) over the boundary. Gabriel finished with 2/25 and Suleiman Benn, who did not bowl on the fifth morning 2/44, and Taylor 1/64.