Export of educational services from SVG 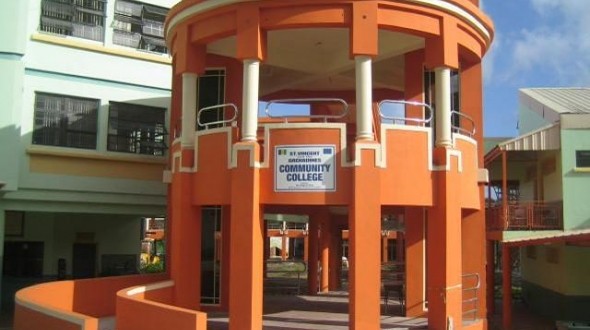 An English language institute will be set up at the Community College.

THE ECONOMY Of SERVICES

In excess of 70 per cent of the economy of St. Vincent and the Grenadines is comprised of services, mainly tourism, banking and insurance, education and health, and transport (air, sea, road).  The decline in the production of goods (agriculture and manufacturing) as a percentage contribution to the Gross Domestic Product (GDP) has been underway since the late 1980s.  This decline, proportionately, and in the case of agriculture, absolutely, has accelerated in the 1990s and thereafter, largely due to globalisation, and its twin, trade liberalisation.

In the case of bananas, the dismantling of the preferential regime for our bananas (Windwards and Jamaica) in the United Kingdom has been decisive.  After Britain joined the Single European Market on January 01, 1993, the preferential market in banana came under irresistible challenge.  First, a new banana regime was introduced in July 1993 which cut the preferences; then the USA and Ecuador challenged successfully that very cut-back in preferences as wholly insufficient and won repeated battles for further cuts in preferences before the World Trade Organisation (WTO).  The upshot of all this is that the altered banana trading regime and market conditions have occasioned an almost complete “free trade” in bananas with practically no market preferences.  This increasing “free trade” in bananas, leading practically to the removal of all market preferences, has meant the gradual then sharp decline in the volume and value of banana exports from St. Vincent and the Grenadines.  In 1992, the last of the full year of preferential market treatment for our bananas, the value of banana exports stood at roughly EC$120 million.  By 1995, banana exports fell to EC$55 million; and by the year 2000 to below EC$20 million.  By 2012, both regional and extra-regional exports of bananas fell to below EC$6 million.  Clearly, the glory days of bananas are gone.  The economic slack has to be, and is being taken up by among other things, agricultural diversification (root crops; fruits and vegetables; poultry and small ruminants; cattle), fisheries, light manufacturing (beer and agro-processing), and services.

In the 1990s, the manufacturing sector was dealt body blows from trade liberalisation generally and the North American Free Trade Area (NAFTA).  In recent years, we note a manufacturing upswing particularly in beer, beverages, rice and agro-processing.

Still, the growth in services is the driver of the alteration in the composition of the economy, from goods to services.

A promising front in the export of services is in the area of education, principally “offshore” medical schools for overseas students overwhelmingly, and now the teaching of English Language as a second language to foreigners (mainly foreign teachers).

Over six years ago, the agreement with the Kingstown Medical School (a branch of the St. George’s Medical School in Grenada) came up for renewal.  The owners of St. George’s Medical School treated the one in St. Vincent and the Grenadines as a mere adjunct through which under 300 clinical students were rotated through our Hospital and other medical facilities.  For the renewal of the agreement they demanded exclusivity of all the medical facilities in St. Vincent and the Grenadines.  Clearly, they wanted to keep out possible competitors.  The Government countered that such a demand was unacceptable unless the Medical School ramped up the numbers to at least 1,500 in five years.  They rejected our counter-proposal; so, they departed.

When that happened, Arnhim Eustace and the opposition NDP claimed that it was the Government’s foreign policy, especially Comrade Ralph’s closeness to Fidel and Chavez, that caused the Government of the USA to pressure the Medical School to pull out.  As Wikileaks exposed, the Embassy of the USA in Barbados in its communication to the State Department in Washington labelled Eustace and the NDP as exponents of “political opportunism” and assessed Eustace’s stance as being “wild and amusing”.

Since the pull-out of the Kingstown Medical School, with its less than 300 students, the ULP government has attracted four medical schools: Trinity University School of Medicine, All Saints Medical School, the American University of St. Vincent and the Grenadines, and St. James’ Medical School.  By the end of this month (September 2014), there will be over 700 medical students in these Medical schools; and the numbers are growing.

Meanwhile, on Comrade Ralph’s recent official visit to Ecuador, he negotiated with President Rafael Correa the teaching of English Language to Ecuadorian teachers through the St. Vincent and the Grenadines Community College.

THE VALUE OF EDUCATIONAL TOURISM

When the Kingstown Medical School pulled out over six years ago, Arnhim Eustace estimated that 300 overseas medical students brought economic value (directly and through the multiplier effect) of EC$38 million annually.  Eustace’s “multiplier” was on the high side; he was dramatising for political effect the loss of the Kingstown Medical School.  But if 300 students created a value to the economy of EC$38 million in 2007, clearly 700 medical students in 2014 must be creating economic value of at least EC$90 million.  Add the 200 Ecuadorian teachers from January 2015 and the economic value created would be in excess of EC$100 million.

The expansion of the medical facilities in St. Vincent and the Grenadines adds value not only to the delivery of medical services to Vincentians but also as locales for training of medical students.  These expanded and upgraded medical facilities include: The rehabilitation of the Milton Cato Memorial Hospital; the construction (near-completion) of the Modern Medical Complex at Georgetown; the construction of Polyclinics at Stubbs (completed), Buccament and Mespo (about to start under the 10th EDF); and the building and upgrade of clinics and other medical facilities, including the Smart Hospital at Georgetown.  Indeed, one of the Medical Schools is keen on utilising the modern facilities at Georgetown as one of its primary bases.

The recent expansion and upgrade of the Villa Campus of the St. Vincent and the Grenadines Community College add value to the teaching of the English as a second language to foreigners. Over 80,000 square feet of additional floor space was added with modern IT facilities.  Further, the massive training of our teachers at university level has added considerably to the pool of available personnel to teach English as a second language to foreigners.  Ecuador’s interest is being bolstered by an expression of interest from Chile and Venezuela.  And Ecuador is desirous of doubling the number of its teachers in St. Vincent and the Grenadines to 400 in September 2014.

All these overseas students in St. Vincent and the Grenadines mean, among other things, direct payments for education (in the case of the Ecuadorean students); rental of apartments/homes; transportation; consumption of food, electricity and water; and so forth.

The coming on stream next year of the operation of Argyle International Airport adds value to all this.

The banana industry, at its highest point, earned, gross, EC$120 million in export value, is difficult to replace in its spread and impact, still, it is clear that the children and grandchildren of banana farmers and workers, who are among the principal beneficiaries of the Education Revolution, are in line to benefit solidly from the expansion of export of educational services.  Meanwhile, other forms of economic diversification, including agricultural diversification, continue apace.

In time, educational services have the potential to earn more than banana industry, even in its heyday.  But we must persist with bananas as a central pillar in our vital agricultural sector.  That is the position  of the ULP government.

As Comrade Ralph has always sensibly advised, St. Vincent and the Grenadines must adapt and come to terms with its external environment without losing its core Caribbean essence.  Dinosaurs became extinct because they failed to adapt and change; but small mammals adapted, survived and thrived.  As the Comrade insists, metaphorically, St. Vincent is a small mammal!

It is simply amazing that the NDP and the “internet crazies” are now seeking to throw cold water on the value of exporting educational services.  These people, as we know, are an unserio us group.

3 replies on “Export of educational services from SVG”