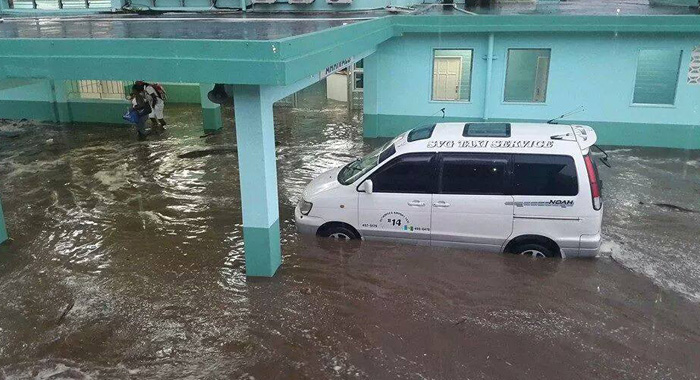 The E.T. Joshua Airport was flooded on Satruday. (Internet photo)

Prime Minister Ralph Gonsalves on Tuesday acknowledged citizens’ frustration with the flooding of the E.T. Joshua Airport and Kingstown when there are torrential rains.

Kingstown and the airport were flooded when a low-level trough system brought torrential rains on Saturday.

The airport was closed until past 5 p.m. as a result of the flood, leaving in- and out-bound passengers stranded.

The floods also deposited large amount of silt and other debris in the nation’s capital.

“I know that there are complaints being made about anytime [there is] a whole set of rains that the airport is flooded. Well, I inquired about the cleaning of the drains. [Permanent Secretary in the Ministry of National Security Godfred Pompey] told me that the drains were cleaned a few days before. But when you have the landslides, the landslides they come down, they bring down a lot of debris and they block the very drains,” Gonsalves told a press conference on Tuesday.

Gonsalves said while citizens “must be critical and always doing the assessments in a critical manner, we must not do them in a hysterical manner and let us just be calm about these things, because, when disasters happen, above all else, we need calm, and we need all hands on deck.

“As soon as these things happen, all soldiers, metaphorically, must report for duty. I mean that is the nature of the business. That’s why I have commended the various persons who reported for duty — some of them named, some of them unnamed,” Gonsalves further said.

He also addressed the drainage problem in Kingstown.

“We know the drainage problems in Kingstown and it is not true that drains have not been cleared in Kingstown. The drains have been cleared in Kingstown, but we do have structurally a drainage problem and this is an age-old challenge. I am hopeful that we will be able to on a longer term basis be able to solve the problem, and I am hopeful that when we have the new city at Arnos Vale that we’d be able to create the necessary problem wherein we would be able to do some significant remedial work in the drainage system in the city,” he said.