‘Extraordinary’ Super40 finale under the weather 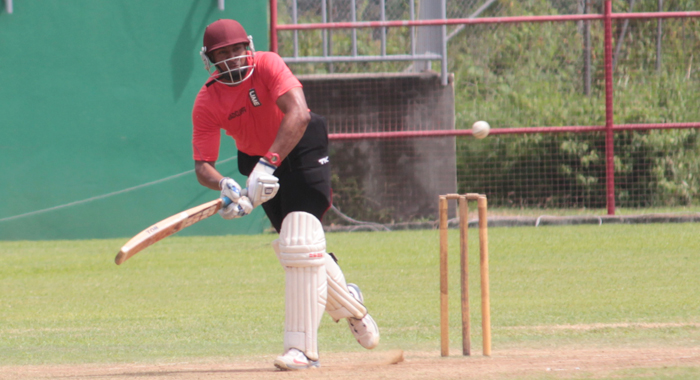 LIME Radcliffe will be hoping for another crushing defeat of their opponents. (IWN photo)

The St. Vincent and the Grenadines Cricket Association will be keeping their fingers crossed and hoping that the showers will subside in time for this weekend’s finale of the SVGCA Digicel Super40 at the Park Hill Playing Field.

Reports from weather officials say that the island is currently being affected by a system, which is expected to add more showers to those of Thursday and Friday.

According to reports the million dollar Park Hill venue, while presenting a useful picture, may come up short with the required drainage to facilitate minimum loss of playing time should the weather be unruly ahead of the “Rumble in De Country”.

The test will come on Saturday, when Lime Radcliffe and iShallz Byam Physical Therapy are set to battle in a semifinal encounter from 10 a.m.

Lime Radcliffe earned their berth when they crushed Victors One by 35 runs in their opening encounter last Saturday at the main Arnos Vale Playing Field.

Batting first, it was the batting of captain Lindon James (78) at the top and a brutal innings lower in the order by Westwick Strough (43 five sixes two fours) that propelled Lime Radcliffe to their eventual total of 248/5 in their 40 overs, then dismissing Victors One for 213 in 37.4 overs.

James (3/6) then returned with the ball to grab crucial wickets to support offspinner Rodney Lawrence (4/33) to seal the victory.

Boasting more experience than their opponents — who qualify among the five teams based on their winning in the First Division — Lime Radcliffe are being seen as overwhelming favourites to march into the final.

Undoubtedly still disappointed by his failure, due to regulations, to recruit Victors One champion batsman, Donwell Hector, the former Windwards opener, may be looking for other means to topple his more vaunted opponents.

Still capable of destroying an attack on his day, Byam will be looking to guest player in national allrounder Dawnley Grant, who bowls with forceful pace and hits the ball cleanly; captain, Javid Harry, whose left-arm spin and lower order batting as well as the contributions of the other guest players in promising pacer Romario Bibby and the big hitting Rawdon Bentick to manufacture the plot.

Bibby, a policeman, has shown a great deal of promise over the last two seasons and was the leading pacer in the domestic competition. With the ability to move the ball both ways, added to a good yorker, he is expected, in tandem with Grant, to make life uncomfortable to the LIME Radcliffe top order, even if conditions are not helpful.

Bentick, who could be aptly described as “the languid sledgehammer”, hits the ball a long way in a lazy effortless manner that has won him many admirers.

Indications are that the team losing the toss will have the least headache, since the pitch, which is still relatively new, is yet to develop any known characteristics.

The winners of this match will oppose defending champions, Team Rivals who cantered into the final with a clinical 115-run victory over Guardian General Saints at Sion Hill Playing Field last Sunday.

The final is expected to be graced with the presence of West Indies batsman, Kirk Edwards and the pacey Grenadian Nelon Pascal, who will each represent one of the two teams who make it through.