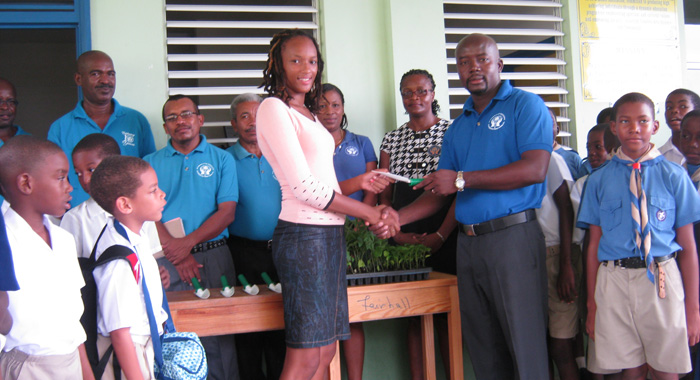 Junior Simmons of the Police Credit Union hands over the seedlings.

The Police Co-operative Union (PCCU) o Friday donated a quantity of vegetable seedlings and garden tools to the Fair Hall Government School during the school’s assembly.

Among the seedlings donated were egg plants, tomatoes and sweet peppers for their green house.

In delivering brief remarks at the event, President of the Police Co-operative Credit Union, Junior Simmons expressed the Credit Union’s excitement at being associated with the school since 2012 when the school was adopted by the PCCU.

Simmons stated that the vegetables, when matured, will supplement the food that is prepared by the school’s school feeding programme.

He encouraged the students and teachers to take special care of the seedlings on a daily basis to ensure that they grow and bear fruit.

Simmons urged the students to grow the seedlings with pride because by so doing, they are playing their role in ensuring that SVG grows enough food to feed its population.

In her remarks, principal Sherron Peters stated that the school is delighted to continue its partnership with the PCCU.

She thanked the Police Co-operative Credit Union for its donation and gave the assurance that the produce from the seedlings will be used to supplement the school feeding programme at the school.

Peters said the Fair Hall Government School emphasizes and encourages healthy eating, thus the school is happy that the PCCU has chosen to assist them in taking care of their health needs.

The principal encouraged the students to save in the School Co-operative in order to enable the PCCU to be in a better financial position to provide more assistance to the school.

Manager of the Police Co-operative Credit Union, Members of the Board of Directors and the Education and Marketing Committee also attended the ceremony.

One reply on “School receives seedlings from Police Credit Union”