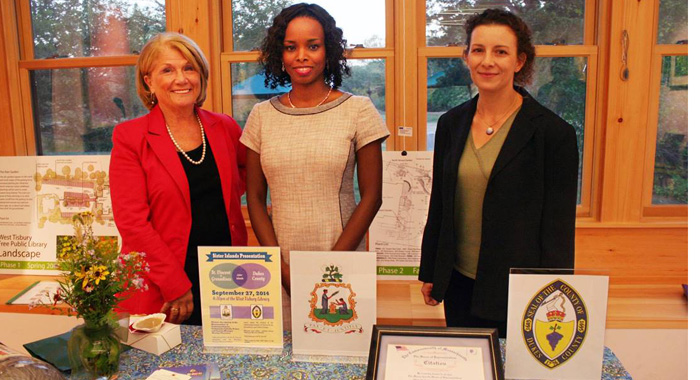 WASHINGTON, DC — St. Vincent and the Grenadines (SVG) now officially has a Sister Islands partner in the United States, following the formalization of a relationship with the United States Island of Martha’s Vineyard, located off of Boston, Massachusetts.

The Sister-Islands relationship was formalised after the signing of a memorandum of understanding (MOU) between SVG Ambassador to the United States, La Celia A. Prince, and the Manager of Dukes County, Martina Thorton, whose role is similar to that of a mayor.

The MOU covers a range of areas for collaboration, including fire prevention, management and training; education and library exchanges; fisheries; agriculture and tourism development.

The partnership was born out of a briefing session which Prince held with then incoming U.S. Ambassador to Barbados and the OECS, Larry Palmer, who was about to take up his assignment at the time.

Prince identified a number of areas in which SVG was seeking the assistance from the United States and that included capacity building, training and equipment for the SVG Fire Department.

In attendance at the briefing meeting also was longtime friend of the SVG and former Peace Corps volunteer who formerly served in SVG, Anita Botti.

Botti, a resident of Martha’s Vineyard, saw the ready fit between both islands and suggested the Sister Islands partnership as the appropriate vehicle through which the United States and SVG can collaborate to achieve several of the areas identified for assistance by Prince.

The idea found welcome reception by the residents of the Vineyard.

At the ceremony for the signing of the MOU, Prince expressed the enthusiasm of the government of SVG for the start of the relationship with Martha’s Vineyard.

“As my country’s representative in the USA, one of my primary responsibilities is to foster enhanced government-to-government relationships, but there is so much potential in people-to-people diplomacy, the value of which is borne out here today,” she said.

“I believe that there is a lot we can share and learn from each other in this Sister Islands Partnership to make it a mutually beneficial one.”

In their addresses, both Prince and County Manager  Martina Thorthon underscored the similarities between both islands, including a history with the whaling industry (which has since been discontinued in Martha’s Vineyard); ship-building and heavy reliance on tourism. There were several county officials at the ceremony, who made presentations on the various areas that have been identified for collaboration. The county manager also informally discussed with Prince, her interest in exploring the possibility of recruiting nurses from SVG to work at Martha’s Vineyard, which has a large retirement community but insufficient healthcare providers to meet the needs.

Also in attendance at the ceremony were several Vineyard residents who frequent Bequia and Mustique each year while escaping the northern winter.

With a total area of 100 sq. miles, the island has a year-round population of 15,000 people, but the numbers typically balloon to over 100,000 during the summer months, vacationers—including the political elite and Hollywood celebrities — arrive from all over the country.

As with travel between St. Vincent and the Grenadine islands, access to the Vineyard from mainland Boston is by via small 9-seater propeller planes or ferry boat.

Since the start of talks to establish the partnership, SVG welcomed a visiting delegation from Martha’s Vineyard in 2013 to examine and assess the capabilities and needs of the SVG Fire Department.

The equipment was officially handed over to Prince at the MOU signing ceremony. The items are expected to be transported from the Vineyard and shipped to SVG gratis, with the assistance of Standard Shippers, Inc.

Both libraries are reviewing their respective inventories to match the needs in SVG with the availability of books that can be donated by the Vineyard.

The Sister-Islands programme is an offshoot of the Sister Cities programme which the United States created 50 years ago, to promote a broad-based people-to-people network that fosters strategic links between the US and international communities.