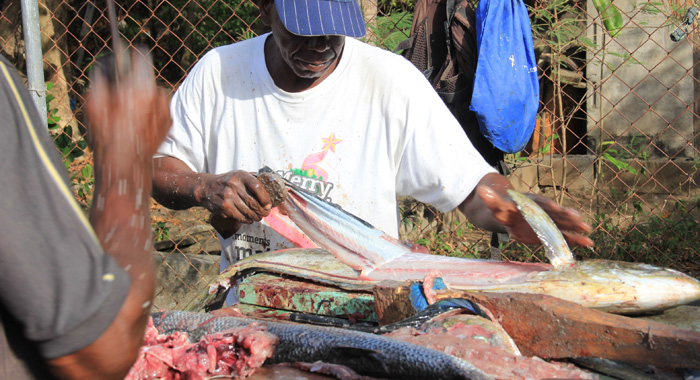 Experts say warmer seas could see some species of fish moving away from the Caribbean. (IWN photo)

PARAMARIBO, Suriname — Two regional experts have warned of the impact of climate change on fish and small ruminants, two important protein sources in the Caribbean.

Susan Singh-Renton, deputy executive director of the Caribbean Regional Fisheries Mechanism, said on Monday, that as the temperature of the Caribbean Sea rises, species of fish found in the region may move further northward.

“This is referring specifically to the large fish that are very mobile, and some of them are warm water species, so the sea surface temperature provides a natural boundary to their range and, normally, we will find these species distributed just within the tropical seas and they are accessible to us as a result,” she said, adding that these species include dolphin fish, kingfish, and some tunas.

“What you will find is that if you have a warming of a sea water, then that natural range of the fish becomes extended and [the fish] are able to move away; they move northward,” she said in an interview.

Singh-Renton was speaking on the sidelines of a workshop titled “Improving Climate Change Resilience in the Small Ruminants and Fisheries Industries in the Caribbean”.
The workshop forms part of the 13th Caribbean Week of Agriculture, taking place here until Friday, under the theme “Transforming Caribbean Agriculture Through Family Farming”.

Singh-Renton said experts have seen that in certain years, species of fish found in warmer waters such as the Caribbean are caught outside of their normal range.

“We had recorded lower catches in those years,” she further said.

Singh-Renton also noted that there are factors that increase the population of these fish, but experts have not determined the cause.

“But sometimes you have the productivity plumes from the river outflows — from the Amazon and the Orinoco. As the river flows, that productivity changes, and the fish are following the food.

“So depending on the direction of that flow, if some things, for example, [if] currents, change that flow and take it away from the islands, then those fish will not become available,” she said.

Singh-Renton said it is difficult to determine the impact of climate change on food security and that of lower fish catches on the economy of the region, adding, “there is a lot that we don’t understand about the biology and ecology of these resources and what triggers the migration patterns.

“But certainly, if these fish are less available to our fisherman, we will see less fish production,” she said, adding that this will be the case unless fisherfolk invest in   technologies that allow them to go further to catch those fish.

“And you have to remember now that you may be entering foreign jurisdiction, in terms of you will need agreements to enter some other countries’ waters, for example, if that becomes the case,” she said.

And, Norman Gibson, small ruminants commodity leader at the Caribbean Agricultural Research and Development Institute, said in a separate interview on the sideline of the same workshop, that there are two critical issues relating to the impact of climate change on small ruminants.

“Small ruminants represent [an] important commodity in the region’s food stocks,” he said, adding that in many countries they are the meat of choice.

He noted that in Trinidad and Guyana, there are some religious festivals that demand the use of either sheep or goats.

“We know that, in the region, in terms of nutrition security, it is a commodity that we have to give some attention to, given how much it is already being used in our cuisine, how much it is demanded by the local population, and the fact that it is actually a much better product than what we import from New Zealand and Australia, in terms of flavor and other characteristics,” Gibson said.

He said climate change now brings “a new dimension to everything we do in agriculture, and the thinking is that if we are going to continue to improve small ruminant production, then we have to consider the impact of climate change and what that will do to existing stocks and whether or not farmers are prepared, at this point, to meet those challenges,” Gibson explained.

“So, when we consider food and nutrition security in the region, we think of all the things that go into that basket. And, of course, small ruminants is one.

“And climate change affects everyone, therefore we have to consider all commodities in the context of climate change,” Gibson said.

He said that the higher temperatures that result from climate change cause small ruminants to become more stressed, “especially in the context of the Caribbean where in a lot of systems, animals are roaming outside or often grazing in pastures without water during the course of the day.”

“It means that they begin to have respiratory issues, and therefore, as a consequence, they don’t put on as much meat, they don’t produce as much milk…” he said, adding that there may also be saline intrusion into pastures as a result of climate change, making small ruminants less productive.

Gibson explained that while small ruminants might survive extreme weather like hurricanes, the impact may be seen weeks later.

“One of the things that we have noticed is that when you have intense activity, hurricanes and so on, small ruminants tend to sense the intense activity.  Thereafter you begin to see the effects, in a few weeks after the storm has passed.

Because of increased stress brought on by the event, they have more problems with parasites and so on. And the mortality rates can actually be quite high as a consequence of those things,” he said.