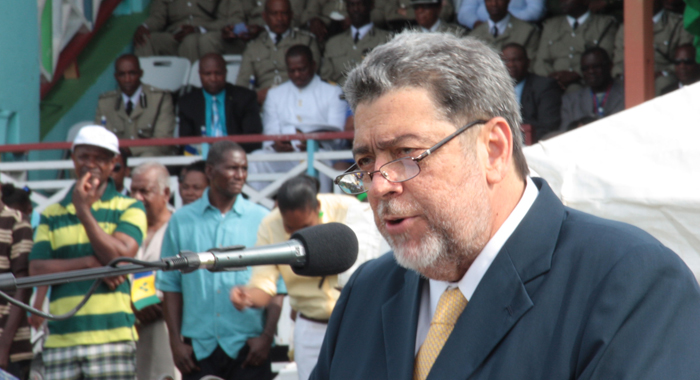 The government will from January increase the salary of its part-time workers such as cleaners and School Feeding Programme kitchen staff, Prime Minister Ralph Gonsalves announced in his address on Monday to mark the nation’s 35th anniversary of independence from Britain.

“In the same vein, our government will shortly set in train the review upwards of the statutory minimum wages for various categories of workers,” he also announced to the thousands of persons who attended the military parade at Victoria Park, and media audiences.

Gonsalves, however, did not announce an end-of-year bonus, as some persons had hoped, as shown by a few voices shouting “Bonus! Bonus!” just before the Prime Minister took to the podium.

But Gonsalves did announce that several existing policies will continue, and a plan to give government buildings in Kingstown an EC$50 million facelift over a five-year period.

He announced that the duty-free concessions on Christmas barrels, which his government pioneered in 2001, will this year run from Nov. 17 to Dec. 31.

A special Christmas works programme of at least EC$3 million, plus a special clean-up provision of EC$500,000 for capital Kingstown, will be executed this year.

“Thousand of Vincentians will receive short-term employment under the programme,” Gonsalves said, adding that all the money will be spent before Christmas.

He said that he is finalising an order for EC$6 million in building materials, including a provision for materials, to begin in January 2015 the “Lives to Live” housing programme, which will see the government building wooden houses for persons with physical and other disabilities.

“We have to take care of them very specially,” Gonsalves said.

He also announced that the soft loan of EC$6 million to the Farmers Support Company will be buttressed by a further EC$6 million for 2015.

Gonsalves said he plans to put plans in place so that the farmers can get the money early in the New Year.

Advertisements are already published for the 2015 applicants for the Support for Education and Training (SET) programme, Gonsalves pointed out.

Under the SET programme, interns who have A’ Level and associate degree qualifications will receive a stipend of EC$1,100 per month, while those with university degrees will receive EC$2,200, for up to one year’s employment with the government.

Gonsalves also said that his government last week decided on “a bonanza” of national scholarships.

Gonsalves said the total cost of the awards will be EC$5 million.

“These are in additional to the plenitude of tertiary education opportunities through other scholarships, tuition bursaries and student loans for economically disadvantaged students,” he said, adding that St. Vincent and the Grenadines is on target to have, on average, at least one university graduate per household by 2015.

“The poor and the working people, along with others are now going to university in numbers they couldn’t dream of 15 years ago.”

The Prime Minister told the nation that in the Budget Address for 2015, he will detail a five-year, EC$50 million programme of rehabilitation and construction programme of government buildings in Kingstown, starting next year.

“This is part of a more comprehensive urban development plan for our capital city. We have to make Kingstown look a lot much better and fix it up properly once and for all,” he said.

Gonsalves also acknowledged that many of the secondary village and feeder roads “are in a state of disrepair.

4 replies on “St. Vincent gov’t to raise salaries of its part-time workers (+Video)”