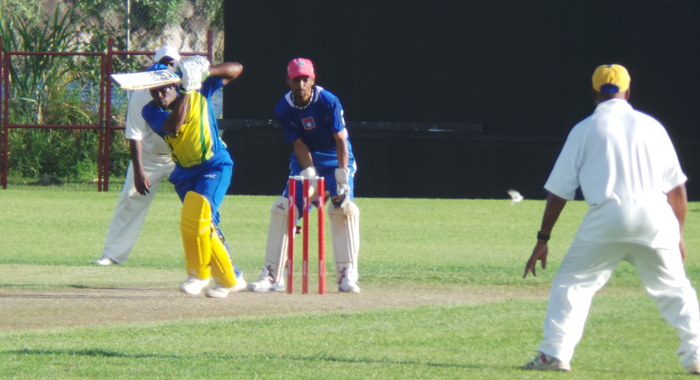 New York Masters began their 2014 tour of St. Vincent and the Grenadines in an inauspicious manner when they went down to Arnos Vale Masters by 34 runs in their opening T20 encounter at the main Arnos Vale Playing Field on Tuesday.

The result looked to be the opposite when the visitors, who are made up primarily of Vincentians resident in New York, were 66/0 in the 15th over.

They were given this excellent start by Cheldon McMillan (21) and Alston Bacchus (44) before McMillan, struggling badly with fitness, was runout.

McMillian, known here as “Keegan” from his football-playing days, failed to find the boundary during his stay at the crease, but counted 8 twos and 13 singles, while the more elegant and aggressive Bacchus struck 3 fours and 1 six. The separation of the pair spelt doom for the North Americans, who then skidded about as if caught in snow on the highway and landed ungainly on victory street, still some way from their destination.

No other batsman got into double figures as Junior Bacchus, bowling brackish medium pace, took 2/7 from his 3.4 overs.

Earlier, Arnos Vale Masters transported along on the backs of Bill Edward (27), Vibert Bute and Ted Roberts (14) and Uriah “Tommy” King (11) reached 117/8 in their 20 overs, after taking first knock.

Those present were able to see the elegant onside play of Bute and a trademark savage square cut by King. And they also witnessed the still pedestrian pace of Roberts between the wickets resulting in him going by the run out route for yet another time in his career.

Allan John, who previously bowled seamers, finished with 4/20 with his “slowlypops”.