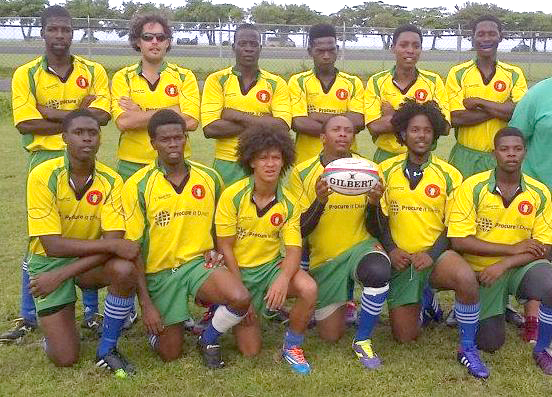 The St. Vincent and the Grenadines Rugby Team.

A 12-member squad has been chosen to represent St. Vincent and the Grenadines at the North America Caribbean Rugby Association (NACRA) 7-a-side tournament in Mexico this week

The players will leave St. Vincent on Monday, Dec. 1, for Mexico City where the tournament, which is on Dec. 3 and 4, will be played.

The tournament will see St. Vincent competing against 11 other countries, all of which are members of NACRA.

The team has been preparing and raising funds for the tournament over the last few months and is very excited to attend the tournament as the Union had to miss it last year due to lack of funds, the union said in a press release.

The squad is a mixture of experienced longstanding national players, with some excellent new talent who are showing great potential in becoming an impressive team together, the release said.

“The executive couldn’t be happier with the commitment of the selected team and wishes them all the best in what will be a great experience and an enjoyable tournament for all involved. We would like to thank those that have supported this long journey, especially our sponsors, who have made it possible for us to travel,” the release said.