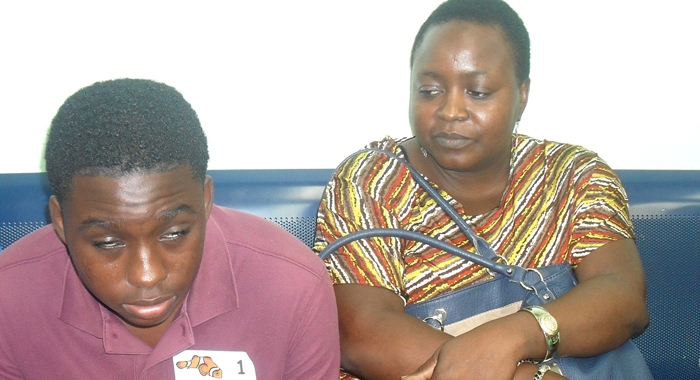 For many years the Milton Cato Memorial Hospital plays host, through the World Pediatric Programme, to a number of surgeons from the United States.

During November, these surgeons perform operations on children whose spines have very severe curves.

Such needed surgery is to lessen the curve and prevent it from getting worse. The operation for scoliosis is a spinal fusion using modern instrumentation systems in which hooks and screws are applied to the spine to anchor long rods. The rods are then used to reduce and hold the spine while bone that is added fuses together with existing bone.

Parents from the region journey to St. Vincent and the Grenadines first for diagnosis, and the eight most critical cases are then selected to undergo corrective scoliosis surgery.

This year, four St. Lucia children were selected, and one of the parents, Virnette St. Omer-Fontenelle, had high praise for the nursing staff of the Milton Cato Memorial Hospital following her son’s surgery.

“Everybody has invested … the nurses at Milton Cato,” St. Omer-Fontenelle told this writer at MCMH.

“They made my life so much easier because I felt that they were like part of my son’s recovery. They were always attentive, never took any fussing to mean that we were not appreciative. In fact they encouraged the children to talk about they felt.”

Although scoliosis is not life threatening, the deformity it causes in children can have a negative impact on the individual’s life.

“When you think of something like scoliosis that although it is not life-threatening, because of the deformity it causes it creates a lot of tension for you and for your child in the future,” St. Omer-Fontenelle said.

She added that the surgery and overall programme is really empowering, as it also affords parents the chance to have the corrective surgery done at no cost to them.

Her son, Miles, had 16 screws and two metal rods placed in his back to straighten his spine, and each screw costs US$1,000.

Two surgeries were performed daily. All eight children are to return in November 2015 for an assessment, but during the interim, are under the supervision of medical experts in their home countries.