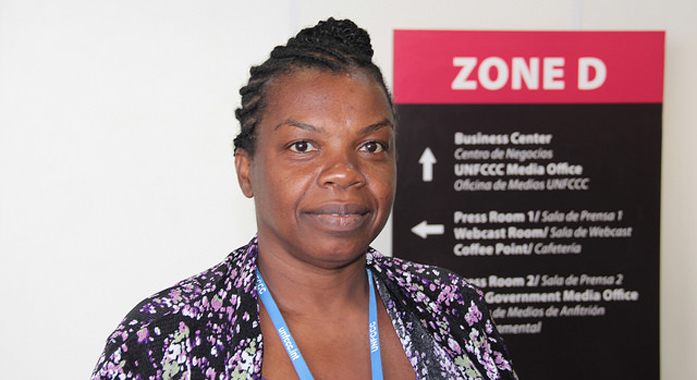 LIMA, Peru, Dec. 5, CMC — A Jamaican member of a global association of farmers observing the world climate change talks here has called for the inclusion of the views of rural farmers in the negotiations.

Mildred Crawford of World Farmers Organisation (WFO) says that her organisation is hoping to highlight the impact of climate change-related extreme weather events on rural farmers.

Crawford, who has been advocating on behalf of rural farmers for the past 10 years, told the Caribbean Media Corporation (CMC) that she is disappointed that the formal negotiations do not take into account the views of rural farmers.

Crawford came to Lima for her first-ever United Nations climate change conference, hoping for more opportunities to highlight to negotiators the ways in which climate change is affecting rural farmers, particularly women farmers, such as those in her community in Brown’s Hall, St. Catherine, Jamaica.

“If you sit in a chair and write it, then you are only guessing. I will invite them to live in the Caribbean for two years or more and see the threats that affect rural women, and just rural women and small farmers, but not just small farmers, but large farmers, of course,” she said of those taking part in the closed-door negotiations.

A drought in Jamaica this year destroyed agricultural crop, causing prices to double.

But the higher prices did not result in higher income for many farmers, as consumers refused to purchase the agricultural produce at the increased price.

At COP20, countries are negotiating a legally binding agreement — to be signed in Parish in 2015 — that will seek to curb human-induced climate change and its disastrous effects, largely on developing countries like those in the Caribbean, which contribute the least to, but suffer the most as a result of climate change.

Crawford is among other civil society activists who are trying to highlight issues that they think negotiators should also focus on.

She told CMC that while the Caribbean is a tropical region, there are now longer dry spells, and shorter periods of — often intense — rainfall.

These extremes of dry and wet either destroy or compromise the quality of the agricultural produce that rural farmers need for their economic wellbeing, including for export.

“We also want to point out to member states [of the climate change convention] that rural women play a critical role in agriculture and should be recognized as agents of change,” Crawford told CMC of her organisation’s mission at COP20.

“We (rural farmers) have indigenous knowledge that is very critical to development and to planning, and so we ask their respect in this regard by including us in their dialogue at all levels, so that we can participate and share knowledge.”

Crawford said that rural women living in coastal areas have been displaced on many occasions because of storm surges.

“And we ask that all these be considered as effects of climate change, and it can only be recognized when our farmers who are directly affected have voice in the dialogue.”

Smallholder farmers in developing countries are more than victims of climate change; they are a vital part of the solution to global warming, President of the International Fund for Agricultural Development (IFAD), Kanayo F. Nwanze told CMC.

“We see smallholder farmers as an important part of the solution to the climate change challenge,” he said.

Nwanze highlighted the contribution of the 500 million smallholder farms who are responsible for around four-fifths of food supplies in developing countries.

“Small farmers often experience more extreme and unpredictable weather, yet they are among the least represented in national and global policymaking on climate change.

“What IFAD emphasizes in the climate change debate is that smallholders are among the most effective clients for public funds for dealing with issues around climate change,” Nwanze added.

In its publication, “The Smallholder Advantage”, IFAD says development gains are being undermined by extreme weather events such as floods, droughts, and tropical storms as well as “creeping” climate stresses like soil erosion, sea level rise and pest infestations.

“Rural smallholders … are experiencing first-hand the impacts of climate change.

But Ngedikes Olai Uludong, lead negotiator for the Alliance of Small Island States, a negotiating bloc that includes the Caribbean, told CMC that food security issues are “fairly new” at the climate change talks.

“In terms of having food security issues come in, you’d have more success in having it at a side event,” she said.

She, however, said that events on the sidelines of the talks complement what negotiators are trying to achieve behind closed doors.

“Those are real actions, farmers having those side events encourage those in the conventions to understand what the needs are, to improve how we deal with food security issues, and those are real issues,” Uludong told CMC.

She said that in the formal talks, negotiators are discussing a post-2020 climate deal.

The talks include the range of impacts of climate change, including food security and the sorts of financing streams under the climate change convention that can be used to address these issues, Uludong told CMC.

“While, yes, the farmers are here, all those other organisation that deal with adaptation on the ground are here, this convention has to have this financing mechanism that they can access through their government to make those sort policies to help increase farming option,” she said.