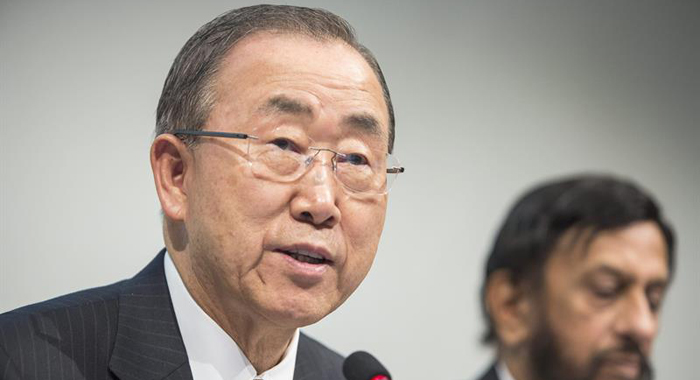 LIMA, Peru, (CMC) — The 15-member Caribbean (CARICOM) says it is “heartened” by the call of United Nations Secretary General Ban Ki-moon for development finance to be linked to funding for climate change adaptation and mitigation.

“Investments in addressing climate change will propel gains in broader development goals. Conversely, investments made in development must be aligned with our climate aims.

“Just as climate issues are not separate from development issues –climate finance cannot be treated separately from development finance. They are quite literally two sides of the same coin,” Ban told the opening of the High-Level Segment of the global climate change summit here on Tuesday.

International and Regional Liaison Officer at the Caribbean Community Climate Change Centre (CCCCC), Carlos Fuller, told the Caribbean Media Corporation (CMC) that his agency is pleased with the statement of the UN chief, as negotiators move into the final days of 20th Conference of Parties (COP20) to the United Nations Framework convention on Climate Change (UNFCCC), which ends on Saturday.

“We are certainly heartened from a CARICOM perspective that the secretary general recognises our call for enhanced financing is on the top of the agenda for us. Without climate financing, we cannot take the adaptation and mitigation measures that we will like to undertake in the Caribbean to adapt to climate change,” Fuller told CMC.

He said adaptation is a priority for 5Cs.

“It is extremely important that we build the resilience in our agriculture, water, health, food security, fisheries, and all of those are linked to tourism, which is the biggest income earner for the Caribbean.”

The CARICOM climate change official noted that adaptation is important to the livelihood of CARICOM residents.

“In fact, our livelihoods depend on fishing, on farming, on the coastal zones. So, unless those are resources are maintained in some fashion, we will be unable to live in the Caribbean,” he said.

Fuller said CARICOM is “just touching the surface” as far as adaptation to climate change is concerned.

“In the past 10 years for example, the Caribbean Community Climate Change Centre has been able to attract some US$45 million, but that is hardly being felt in the Caribbean.”

He told CMC, hundreds of millions of dollars is needed if the region is to properly adapt to climate change.

Fuller said that in the area of mitigation, while CARICOM countries are a minute source of green house gases in the world, “still, we want to show that we can do something”.

From a sustainable development point of view, the CARICOM region wants to cut its dependence on imported fossil fuels.

“We are spending something in the order of 60 to 70 per cent of our foreign exchange on petroleum products,” he said.

Minister of Forestry, Fisheries and Sustainable Development in Belize, Lisel Alamilla was also pleased with the UN Secretary General’s statement.

“We are really pleased that the Secretary General has called attention to that, because that is critical to developing countries — that when we leave Peru that there is a commitment of $15 billion dollars at minimum to the Green Climate Fund,” she said.

The Green Climate Fund (GCF) is a mechanism within the framework of the UNFCCC, and was founded as a mechanism to redistribute money from the developed to the developing world, in order to assist the developing countries in adaptation and mitigation practices to counter climate change.

The first-ever United Nations Environment Programme Adaptation Gap Report, released last week, has found that, despite funding for adaptation to climate change by public sources reaching US$23 billion to US$26 billion in 2012-2013, there will be a significant funding gap after 2020 unless new and additional finance for adaptation is made available.

Alamilla said she is optimistic that developed countries will contribute the estimated US$100 billion that will be needed annually to finance climate change adaptation and mitigation after 2020.

“We always have to be very hopeful that developed countries will heed the call of the nations that are most affected by climate change and the call by the Secretary General to lend support to the needs of our small island developing states,” she told CMC.

Days before the two-weeks of climate change negotiations end, Alamilla said that Caribbean negotiators have complained about apparent stall tactics.

“There are some areas where the negotiators feel there aren’t progress and they are feeling that intent to really slow down the progress in negotiations. But we still have a couple days and I’ve learnt that in a couple days we can make drastic changes. Once the ministers arrive, there is more willingness to negotiate and reach compromise positions,” she said, in reference to the high-level segment of the talks.

The Ad Hoc Working Group on the Durban Platform for Enhanced Action (ADP) is mandate to develop a legally binding agreement applicable to all Parties to be signed in Paris in 2015, and for it to come into effect and be implemented from 2020.

Alamilla told CMC that negotiators have spent days debating the preamble to the ADP text. “For example, they are only have been focusing on the last few days on two paragraphs.”

At a news conference on Tuesday, Kelly Dent of Oxfam called on developed countries to commit financing to adaptation and mitigation, saying these monies are critical for developing countries.

“So it is actually a bright red line for them, and so it should be, because this is about their very survival. The time is come in these talks for negotiators to stop holding climate finance hostage, to stop using it as a bargaining chip. Because without climate finance, the well is poisoned, and Paris will actually be over before it’s begun,” she said.

She said the real test of the Lima talks is going to be whether developed countries can “move beyond their hard-line positions, their woefully inadequate positions and pledges and develop a roadmap, both toward the 100 billion dollars pre-2020 and also to ensure that climate finance is in a post 2020 agreement or in the decision and the elements text.

“And this will set the table for real progress in Paris,” Dent said.