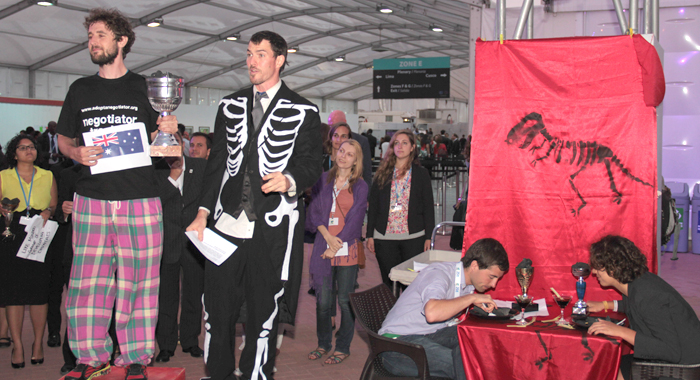 An NGO on Friday symbolically presents Australia with the Colossal Fossil of the Day Award, for doing the most to impede progress at the climate change talks in Lima. (Photo: CMC/IWN)

The talks, which began on Dec. 1, are hammering out a legally binding accord intended to keep global temperature rise to less than 2 degrees Celsius above pre-industrial temperatures.

The new accord, which is expected to halt or curb the disastrous effects of climate change, is slated to be signed in Paris next year and become operational in 2020.

But a source close to the talks told journalists on Friday that it seems clear that the negotiations have hit “serious problems”.

But St. Lucia’s Minister of Sustainable Development, James Fletcher told the Caribbean Media Corporation (CMC) on Friday that negotiators from the Alliance of Small Island States are prepared to tarry as long as a takes to arrive at an agreement that is in their interest.

“Our position in AOSIS (Alliance of Small Island States) is that what we want is that when we leave here we’ve something that gives us a good platform for an agreement in Paris. So, however long it takes us to get that agreeable platform, I think we are committed to tarrying,” Fletcher told CMC.

He said that negotiators are “trying to arrive at a compromise that everybody can live with.

“For us, I think there are some lines in the sand,” he said, adding that AOSIS negotiators were reviewing the text circuited around 10:30 p.m. local time Thursday.

But Fletcher said that AOSIS has already decided on and will not retract from its position on two critical elements, adding that they are fundamental to the survival of small island developing states.

“First of all, the issue of 1.5 degree Celsius is very important for us,” he said.

Fletcher told CMC that chair of the United Nations Inter-government Panel on Climate Change, told OASIS negotiators on Thursday that the world has already emitted 65 per cent of the carbon that it can, if global temperature rise were to be contained at 2 degrees Celsius above pre-industrial levels.

“So, it tells you where we are for a 1.5 degree Celsius warming,” Fletcher said.

The developing world, which suffers the brunt of the effects of climate change, is asking the world to keep temperature rise to 1.5 per cent above pre-industrial levels.

Another contentious issue is payment for the loss and damage resulting from climate change.

Developing countries have argued that they have contributed the less and are least positioned to respond to climate change, but are affected the most by it.

They are therefore asking the developed world to finance mitigation against and adaptation to climate change.

He said that there are other parts of the draft agreement that OASIS can compromise on.

“But, for us, the two important things are respect the science of 1.5 degrees [… and] let’s not now go and put back loss and damage where it was before.”

The talks were scheduled to end on Friday, but, as has been the case at previous COPs, are highly likely to continue into Saturday.

Fletcher was cognisant of the fast-approaching deadline. “There’s no way we can do in five hours what we have not been able to do in five days or five months. So let’s be realistic about this,” he said in reference to the high-level (ministerial) segment of the talks, which began on Tuesday.

“There are certain elements in that text that will not have everything we want. And that’s a fact of negotiation. What we have to do is determine where are our lines in the sand, what are the things we must absolutely see in there and let’s ensure that we identify those and work hard to ensure they are in there.

“And that’s what we are doing –trying to ensure that certain things that are sacrosanct to us, the science, the 1.5 degrees Celsius, and also finance. The text right now is very silent on finance. It’s talking about the INDCs (“intended nationally determined contributions” for the 2015 climate deal) and the commitments will have to be made, but there also must be a commitment to science,” he said.

“Small island developing states are the conscience of this treaty. We are the ones who are most affected already and who will be most affected by a warming climate. There are certain things that we cannot, and should not ever compromise on,” Fletcher told CMC.