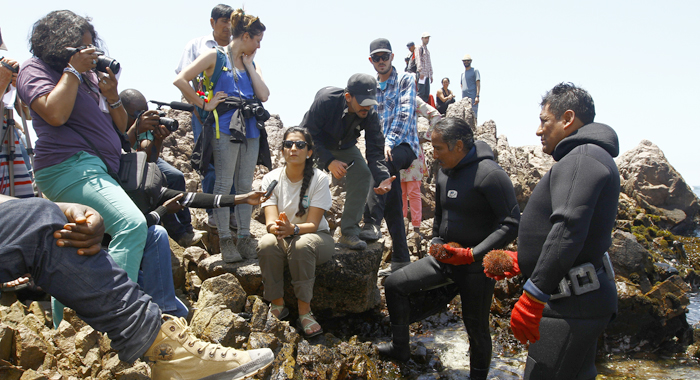 LIMA, Peru, Dec 14, CMC — Looking eastwards from Punta Blanca in southwestern Peru, there is not a single tree or any greenery in sight.

The desert land extends as far as the eyes can see, interrupted only by the white shafts and blades of six windmills standing on top of a distant hill.

But notwithstanding the difference in geography, the fisherfolk in Marcona, some 550 kilometres from the capital of this South American country, are united by one common threat with their Caribbean neighbours: climate change.

Artisan fishermen Julio Rubio Carnales and his brother “Chincho”, both residents of Marcona, have been diving for as long as they can remember.

“For 30, maybe 40 years. We started when we were children,” Carnales says, addressing a group of international journalists covering the climate change talks in Lima, who took the 10-hour bus ride to Marcona to witness how the community was adapting to and militating against climate change.

“What is true is that the period of rough seas are more extensive than 20 years ago, and that’s because of climate change,” Carnales added.

He said fishing has become more dangerous and the operational cost higher as fishermen spend more days at sea.

“And when we return to land and want to sell our fish at a price to recoup our investment, the population thinks it’s too expensive,” Carnales laments.

Marcona is one of five districts of the province of Nasca in southern Peru. The major industry is the Marcona Mine, but fishing has been a long established part of the local economy.

Climate change, however, is presenting a set of challenges to the fishing community along a 23-kilometre stretch of the coastline, where the fisherfolk are partnering with state and other actors to ensure sustainable harvesting of natural resources.

A few minutes after taking to sea with their snorkels gear, Carnales and Chicho, clad in wetsuits specially designed to protect against the frigid waters of the Pacific Ocean, navigate their way among the rock, hauling two small bags behind them.

The men are each from Hijos de Jacob (Sons of Jacobs) and Arca de Noe (Noah’s Ark), two of the 16 fisherfolk associations along a 23-kilometre segment of the coast, that make up the Community of Artisan Fisherfolk of Marcona (COPMAR)

Their bags contain red sea urchins, a prized and pricy delicacy in many areas around the world.

These sea urchins are not for sale, and have been collected only for demonstration purposes because since 2011, COPMAR members have been observing a self-imposed ban on the harvesting of the spiny sea creature.

“The pressure that affected the sea urchin population here is all based on overharvesting,” Carnales tells reporters.

“There was a depletion of the urchins and that is why the community was persistent in imposing a long term ban until we feel it is okay to be harvested with our continuous monitoring,” he adds.

The ban will be lifted when COPMAR decides, based on the findings of research by the Peruvian Sea Institute, which collaborates with the Ministry of Production and COPMAR.

This year, El Niño — the cycle of warm and cold sea surface temperature, in the central and east-central equatorial Pacific — whose occurrence has become irregular in recent decades, has negatively impacted the sea urchins.

“We didn’t see mortality in the urchins, but we saw their defences changing. You have very red urchins that are very healthy and greener one, whose spikes are depressed, meaning that they are not in such good conditions,” Carnales explains.

He notes that whereas the Caribbean Sea is clear and has high visibility, the Humboldt channel has a lot of primary productivity, including plankton.

“The changes we have seen over time is that the concentration of nutrient, or maybe the types of plankton, or something is changing in the water that’s giving us less visibility,” he says.

The pressures of climate change have forced the Marcona community to be more resourceful and to focus on sustainable use of their resources.

“In 2003, we had a serious economic problem in Marcona. We didn’t have money to provide bread for our homes. And the government provided us with an ecosystem area. Since then, we have started working, identifying first which species should help us to eradicate poverty,” says Washington Espinoza, president of COPMAR.

The community learnt that the giant kelp (large seaweeds) could generate money for them.

“But in order to manage that, we had to understand the biology. And nowadays, we know that with this plant, that if we just cut it, it won’t recover,” Espinoza said.

The community then decided that there will only be passive harvesting — picking up the pieces that have washed ashore, which are then sold for up to US$600 per tonne to China for use in cosmetics.

“In this way, we have are providing economically for the 500 fishermen of Marcona. That’s why we are inviting you to see the way that we work in this area that the government delivered to us and is now recovering,” Espinoza said.

Young people here are also buying into the mantra of sustainable use of marine resources.

A group of young Peruvian chefs also travelled to Marcona to learn about the kelp and how they can be used as food in a bid to reduce the pressures on white-meat fish such as flounder, and sea bass.

“Just like the fishermen have done with the kelp, we have to offer alternatives so that you can eat in a sustainable way,” Susana Cárdenas, director of the Punta San Juan Project, tells the Caribbean Media Corporation (CMC).

Her organisation aims to deepen knowledge of the marine-coastal ecosystems of the Humboldt Current in Peru.

Back on land, and some distance away, the true size of the windmills in the distance are revealed as the bus draws closer to Marcona Wind Farm, the first in Peru.

At the farm, 11 turbine can generate 32 megawatts of electrify, enough to meet the needs of 30,000 homes.

Maria Sanchez, of Cobra Group, which owns the wind farm, says that the wind farm is connected to the national grid, and the electricity can therefore be consumed anywhere in Peru.

However, since the electricity is generated in Marcona it is supplied to the district, where it is sold at US$65.52 dollars a megawatt.

Most of the electricity used in Peru — 60 per cent — is generated by hydropower. Another 38 per cent come from coal and gas oil, and the rest is renewable energy.

Each of the wind turbines cost between US$1.8 million and US$2 million and the investment, and the wind farm has a lifespan of 20 years.

Solar panels are also an option in this vast desert, but electricity generated by solar panels in Peru cost US$200 per KWh.

“This is much cheaper. I think in solar energy, the price is very high because of the cost of the solar panel,” Sanchez says.

Like Peru, the Caribbean faces many of the challenges of sustainable use of marine and other natural resource in the face of the added pressures of climate change.

Unlike Peru, however, most Caribbean countries do not have large expanses of land for the erection of windmill or solar farms.

Outside of climate change, the cost of energy remains possibly the biggest developmental challenge to the Caribbean, where domestic consumers pay up to 50 US cents per kilowatt-hour of energy.

The region is bathed by tropical sunshine year-round, and in some countries, some areas are characterised by strong winds.

In spite of these realities, according to 2009 figures from the International Renewable Energy Agency (IRENA), renewable energy generation in the Caribbean ranges from zero per cent in Antigua and Barbuda, to 0.1 per cent in oil-rich Trinidad and Tobago, and 71.9 per cent in Haiti — the western Hemisphere’s poorest nation.

In Antigua and Barbuda, where there is a 100 per cent electricity access rate, in 2009 fuel imports stood at US$143 million (25.6 per cent of total imports), IRENA say.

That same year, Trinidad and Tobago had an electricity access rate of 99 per cent, and its fuel import bill was US$2.2 billion (32.9 per cent) of total imports.

International and Regional Liaison Officer at the Caribbean Community Climate Change Centre (CCCCC), Carlos Fuller tells CMC that the bloc spends 60 to 70 per cent of its foreign exchange on importing petroleum products.

“If we able to get the investments into renewable energy in the Caribbean, we would be independent from energy and be able to use that money to our own adaptation, and we will not have to cry out to the international community for that kind of funding,” he said.

Some Caribbean countries depend heavily on tourism and have agonised over the potential “uglification” of the landscape that comes with wind farms.

These countries include St. Vincent and the Grenadines, which commissioned a 349-kilowatt, US$2.6 million solar farm in November. The solar farm is expected to reduce annual electricity cost by US$185,000 in the country of 100,000 persons where an estimated US$28 million was spend on fuel for electricity generation last year.

“These are all arguments that I don’t buy, quite frankly,” Achim Steiner, executive director of United Nations Environment Programme (UNEP) tells CMC of the view that wind farms spoil the aesthetics of landscape.

“There are enough building on every island that you can begin to put solar on, you can put wind offshore,” Steiner tells CMC of how Caribbean countries could balance its tourism interest and its energy needs.

“You know, if you want excuses, there are thousands,” he says, even as he points out that small island leaders are among ”the most articulate and passionate and informed leaders that I meet as heads of state and government”.

During the climate change talks, which ended on December 13, it became even clearer that some developed countries are not prepared to help poor nations to fund adaptation to and mitigation against climate change.

Some of the world’s richest countries have refused to budge from their hard-lined position, even as the first-ever UNEP Adaptation Gap Report released during the climate change talks, finds that by mid-century, the cost of adapting to climate change in developing countries is likely to reach two to three times the previous estimates of US$70 billion to US$100 billion per year.

In the past 10 years, the Caribbean Community Climate Change Centre (CCCCC) has attracted US$45 million dollars for climate change mitigation and adaptation, “but that is hardly being felt in the Caribbean,” Fuller says.

“In the area of mitigation, we are just touching the surface. … So, certainly, we need to scale up to the hundreds of millions of dollars so we can properly adapt to climate change.”

Fuller said that while the 15-member Caribbean Community (CARICOM) recognise that it is a minute source of green house gases in the world, “we want to show that we can do something, because from a sustainable development point of view, we want to cut our dependence on imported fossil fuels”.

CARICOM has also identified a need for its members to build resilience in agriculture, water, health, food security, fisheries, both for local populations and the vital tourism industry…

“In fact, our livelihoods depend on fishing, on farming, on the coastal zones. So, unless those resources are maintained in some fashion, we will be unable to live in the Caribbean,” Fuller told CMC.