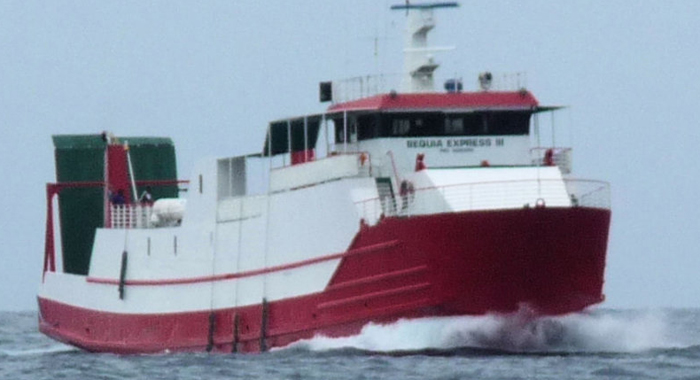 The management of Bequia Express Company on Wednesday described as “nobody’s business” an incident on one of its ferries on Sunday that left injured a 16-year-old male who has not been able to eat properly for days.

“But that ain’t nobody business to put in any paper. I don’t think that is any business of yours,” Ashley Ollivierre of Bequia Express Company told I-Witness News in response to a request for a comment about the incident.

Told that someone injured in the incident had called it to the attention of I-Witness News, Ollivierre said, “Well, they are supposed to call me and I would talk to my lawyer.

“I don’t think that is anybody’s business.

Bequia Express III was about to dock at the Grenadines Pier in Port Kingstown when it slammed into the pier, causing persons to fall to the deck, 16-year-old Jonathan Roy Bacchus, of Diamond, told I-Witness News via social media and telephone.

“As it was docking, it was approaching at rather high speed, and it crashed into the harbour,” Bacchus said of the incident, which occurred between 5:30 and 5:40 p.m. on Sunday.

Bacchus said he hit his mouth against his friend’s head and his mouth started to bleed.

His friend, on the other hand, hit his own head against the boat, Bacchus told I-Witness News.

“As I looked around, there were other people who had fallen off their seats and were rolling on the floor,” he said.

A nurse who was on board the ferry provided him with first aid and summoned an ambulance that took him to Milton Cato Memorial Hospital, Bacchus told I-Witness News.

“The captain didn’t come out until some time after. There were people who were trying to get off, although the ramp wasn’t fully down. After it (the ferry) hit the harbour, it catapulted back out into the deep. That’s how strong the impact was,” Bacchus recounted.

“He (the captain) came out sometime later and said he tried to stop the boat as it was reversing, but it accelerated and he doesn’t know what caused that.”

Bacchus told I-Witness News that he was unable to speak immediately after the incident and has had problems eating since.

“The nurse called an ambulance, they arrived shortly after and load me onto it and carried me to the hospital — me and my friend. And after that, I don’t remember anything else. I think I must have passed out. I am trying to remember. I can’t I hit my head pretty badly,” said the teenager who was discharged from hospital Sunday night.

“I still have a head ache. I can talk a little bit better than I could yesterday (Sunday). My face is still swollen, but it is going down slowly,” Bacchus told I-Witness News.