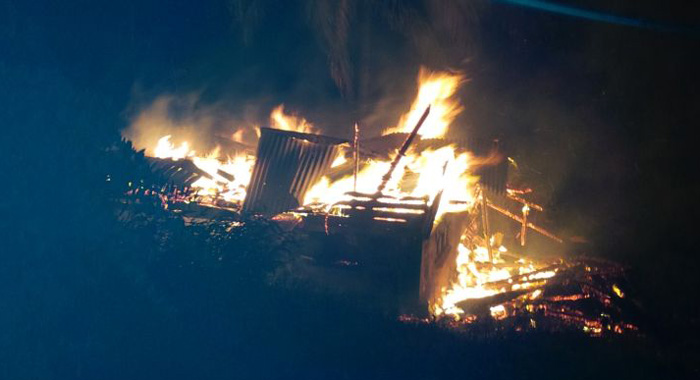 The fire destroyed the two-storey, wood and concrete house.

Police have launched a homicide investigation into the death of Sandra Browne, a mentally challenged woman, whose charred remains were found in her burnout home in Vermont Friday morning.

Superintendent of Police Richard Browne, officer in charge of the Western Division, where Vermont is located, told I-Witness News at the scene that 69-year-old Verton Grant, who also lived in the house, was injured and taken to hospital.

“… on arrival at the scene, they discovered the charred remains of a female, we also were able to assist an elderly male who was an occupant of the house as well.

“… He received burns about the body. He was assisted out of the house. He is presently a patient at the hospital, and what we can say now, investigations are on-going into what transpired,” Browne told I-Witness News.

Residents of Vermont told I-Witness News that Browne was repeatedly a victim of sexual assault and that her companion, Grant, also had mental health issues.

A resident of the South Leeward community, who said he assisted Grant immediately after the fire was discovered, told I-Witness News that in addition to burns, Grant also had what appeared to be chop wounds to the face and hand.

He said Grant told villagers that he was attacked by a male, who also set the house on fire.

The wooden upper storey of the two-storey house was destroyed, leaving only the concrete parts of the ground floor standing.