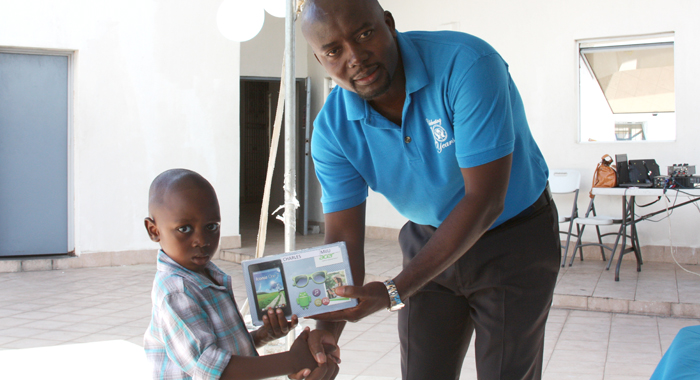 President of the PCCU, Junior Simmons, presenting a tablet to a Junior Saver.

The Police Cooperative Credit Union Ltd. has awarded tablet computers to 38 exemplary junior savers from across the country.

Last Wednesday, the Police Credit Union held it inaugural Junior Savers Challenge Awards in Kingstown, where children who successfully completed the Junior Savers programme were presented with a 7 inch Acer Iconia One Tablet.

Manager of the PCCU, Seymonde Mulcaire, congratulated the successful Junior Savers who completed the “Challenge” and said that their achievement is an indication that even at their young age, they can be disciplined savers.

She encouraged them to continue to save because they are the future of the Credit Union Movement.

Mulcaire stated that the Challenge was opened to children up to the age of 14 and each child had to save one additional dollar each week for 52 weeks. She further explained that the Junior Savers were not allowed to pay in advance or late because it meant that the child would have forfeited the Challenge and would have led to an automatic withdrawal.

The Challenge, Mulcaire said, began with 67 Junior Savers, but only 38 of them completed, each of whom saved at least EC$1,378.
In his remarks, President of the PCCU, Junior Simmons, thanked the parents and guardians of the Junior Savers for choosing the PCCU and congratulated those who completed the Challenge.

Simmons told the children that the monies they save today can chart their future tomorrow.

He emphasised to the Junior Savers that starting a savings plan now, no matter how small, can greatly assist them in achieving their personal goals be it an education, property, a car, or healthcare.

Simmons told the audience that the PCCU subscribes to the core philosophy of credit unionism, which is “people helping people” and that the Credit Union’s main objective is to provide for its member economically, socially and culturally through prudent lending and wise financial counselling. He reminded the members that they are the owners of the PCCU and that is why the Credit Union will endeavour to serve them in the best possible way.

Cecil Jackson, Registrar of Co-operatives, congratulated the winners and also commended the PCCU for the initiative and other programmes that the PCCU has implemented to ensure growth and continuity.

Jackson also highlighted the PCCU’s School’s Agri-business project at Fair Hall Government School and encouraged the directors and management to expand this project to other schools because it is through these and other initiatives the nation’s children will be prepared for the future development of the country.

The top Saver, Calvert Cuffy, Jr., was awarded a special prize of an electronic keyboard for his Acer Tablet. The PCCU’s Junior Savers Challenge continues in 2015, and interested persons have until January 10, 2015, to register their children.