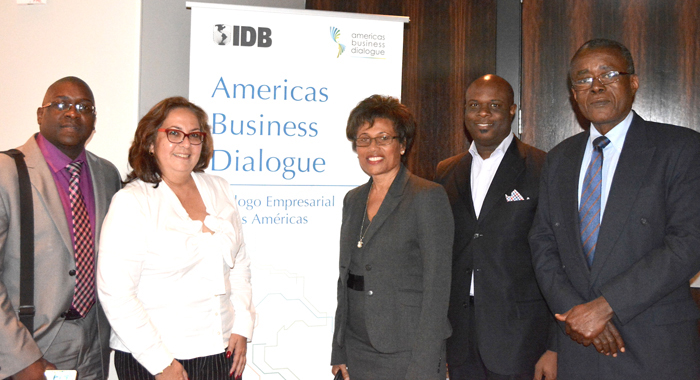 President of the SVG Chamber of Industry and Commerce, Christine Da Silva, 2nd left, and other regional representatives at the meeting.

The Vincentian business community was represented recently at a meeting in Miami where business leaders from the region presented proposals for public-private partnerships to promote development in the region.

The meeting, the Americas Business Dialogue, was held in Miami in December and was attended by President of the St. Vincent and the Grenadines Chamber of Industry and Commerce (SVGCIC) Christine Da Silva.

The meeting was organised by the Inter-American Development Bank (IDB) in preparation for the II CEO Summit of the Americas to be held April 8 to 10 in Panama.

The high-level meeting was chaired by President of IDB, Luis Alberto Moreno and had the special participation of the Vice-President and Minister of Foreign Affairs of Panama, Isabel de Saint Malo de Alvarado.

During the meeting, participants discussed a report that included a number of recommendations and proposals for public-private partnerships by the private sector.

The report will be submitted to the governments of the region in the upcoming summit on the following key topics: improving infrastructure and strengthening trade; facilitating financial resources to spur growth and development; and developing human capital and stimulating innovation and entrepreneurship to increase productivity.

During the meeting, IDB President Moreno highlighted the importance of the private sector and their commitment to build public-private partnerships for the development of the region.

He also spoke about the value of the technical analysis and the identification of best practices, through the Americas Business Dialogue, in key topics for the development of the region, such as infrastructure, human capital, natural resources and energy among others.

He said that while these are important topics for the II CEO Summit of the Americas in April, the challenge of the Summit “is to move from dialogue to action with a successful agenda that has the ability to prevail in time and serve to nourish the public-private dialogue”.

He stressed that the IDB is committed to the efforts.

The Vice-President added that the main topic of the Heads of State Summit “Prosperity with Equity: The challenge of cooperation in the Americas” is very important as it creates a path to reach agreements that can be included in an action plan document that is a very positive step in seeking public-private partnerships for prosperity with equity … only with the participation of private sector, civil society and governments working in the same direction, we will be able to address the challenges of the region”.