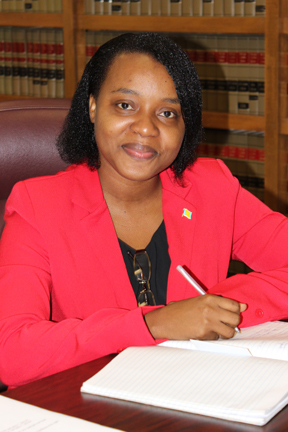 My conversation with you on the ground reveals to me a people who have entered 2015 with despondency and disappointment with the general state of affairs in our Country on one level or the other. We lament the crime situation which seems to be escalating out of control. We moan the difficult financial times where job opportunities are scarce and upward mobility is limited for many. And of course we shake our heads at the ‘same old khaki pants’ type of political practices that result in the exclusion of our best and brightest, more divisiveness and disrespect of each other’s rights and freedoms and the destruction of the St. Vincent and the Grenadines we all wish could return to us. If the truth be told, in the hearts of not a few is the thought “I don’t even think I am voting again in any election.” This is not good.

Fellow Vincentians, the Democratic Republican Party (DRP) understands how you feel and we present to you NEW HOPE IN 2015. The DRP does not represent the same old kind of politics with the promises without fulfilment, the disrespect through the five (5) year term and then the ‘mamaguying’ few months or weeks before election with lumber, cement, galvanize and such like. The DRP represents GENUINE CHANGE for your moral, spiritual, social and economic development and that of SVG. We have great and workable ideas which will yield CONSISTENT REPRESENTATION fruits; ideas which will be implemented with the PEOPLE’S PARTICIPATORY POWER as our watch phrase declares, ideas that will USHER IN A GOLDEN AGE for SVG, making us GREAT in this region. We are OPEN with you and represent a MATURITY which does not oppose for opposing sake, but focus on PROPOSING PRACTICAL SOLUTIONS with SERVICE to you the people.

We are able to guarantee these things because of the root of our party. At it lies the philosophy of REPUBLICANISM which emphasizes the PROTECTION OF INALIENABLE AND INVIOLABLE RIGHTS AND FREEDOMS. When we say that your rights are inalienable we mean that they come from God. Your rights do not come from man, from the legislative pen, from nature or from a majority or elite minority. They come from the hands of God who created you with them. And as such they ought not to be violated except where due process in punishments such as the Death Penalty (also given by God) demands it for respect for the right to life maliciously taken, for example. Therefore the DRP government understands that we are only a few people, elected by the majority of the people to serve ALL of the people and that our duty is to protect your God-given rights and freedoms, not to infringe upon them. We are people like you who are not above the law for there is EQUALITY UNDER THE LAW with us.

My dear people, the DRP does not approach you with any baggage of mistreatment of your relatives, wicked political victimization of your children or robbery of your treasury in any form or fashion. We do not trail behind us any record of disrespect towards you, callousness or contempt against you. Instead, we bring a young, fresh, vibrant and hardworking SERVANT LEADER who, although greatly and publicly humiliated by the hands of her opponents, who with their evil acts and propaganda sought to bury her, has shown great tenacity, to rise and pursue great success to the marvel of many. We offer you a leader who respects and loves God unashamedly, the people and herself and her family by her behaviour before you all. Do not listen to the propaganda attacks on her from those who fear what a team lead by her can do to their long-held ambitions for rule, distract you from the evidence you see of her capability and potential since the days of the REFERENDUM 2009. Consider the real facts of her history and do not let them make you forget.

The DRP also brings you NEW HOPE by being a party of ACTION. And action for us has been ongoing even while we are outside of the halls of government. Although in infancy we have not sat down lazily, lamenting what we cannot do because we “are not in government”. Rather we have shown how through A HEART FOR THE PEOPLE, INITIATIVE and CREATIVITY, PARTNERSHIP and PARTICIPATION of the people at home and abroad, we GET THE JOB DONE.

Recently our DRP leader Anesia Baptiste was the guest of a local government official of the Makavik government of the province of Quebec in Canada when she was hosted by the Mayor of the Arctic Village of Akulivik. Baptiste was also welcomed by Vincentians at the Annual Independence Dinner & Dance of the St. Vincent & the Grenadines Organization of Pennsylvania. Furthermore, she held a Town Hall meeting among Vincentians in Montreal, Quebec at the request of the President of the St. Vincent and the Grenadines Organization of Montreal. While in North America Baptiste also visited with State Representative, State Senator, Judges and Local Government officials (Mayor, City Administrator) of states such as Texas (Waco, Granbury and Rosebud City) and with officials from Women Networks and the United States Department of State in Washington, D.C. All these opportunities were towards the building of relationships and bridges which link us to RICH and MODERN developments for the bringing of new opportunities for development for Vincentians and SVG.

Keep your eyes on the work of the DRP, wait for revelation of our candidate team in due time and show your power to create history in 2015. We invite your participation because we cannot do it alone. NEW PEOPLE we bring, NEW POWER rings in, NEW HOPE we inspire. Come, let us do it together. In 2015 vote the DRP- the party with a heart. May God bless you and may God bless SVG.