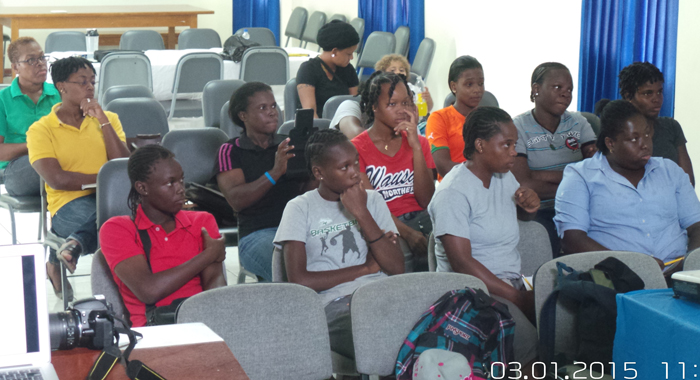 National cricketers in the U15, U19 and female categories are expected to be clearer in their mind as to how they must deal with obstacles and develop mental toughness to achieve their goals of playing sport at the highest level.

They were afforded this opportunity at a two-day seminar on “Motivation in Sports” in Kingstown with facilitator Barbadian sports psychologist Dawn-Marie Layne.

Layne in a post-session interview highlighted the eagerness of the participants to grasp what was being taught.

“I was pleasantly surprised with their positive attitude and the dynamics of the sessions. It is not what I get in Barbados. I am really happy that the St. Vincent Cricket Association invited me to come here to do this,” Layne, 26, said with a beaming smile.

Layne said her experience in her native Barbados and even with the WICB setup has not always been that encouraging, but she is undaunted and is committed to getting better and more rounded players to represent the region.

“There were times I did some sessions with some young players there (in Barbados) and, to be honest, their attitude could be a real turnoff. Their main thing, it seems, is to play cricket and to them these sessions are just waste of time”.

Layne, a former Barbados and West Indies Female A team medium pacer, believes that the older players in West Indies cricket appear not to be aware of the history and culture of the Caribbean and therefore seem lost as to the expectations of the region.

She said that because of this, everything should be done to educate the young players about what motivated Sir Vivian Richards, Clive Lloyd and the great players in the past to play with so much pride.

During her presentation, Layne used some real examples of players whose truancy stymied their progress in the game.

Layne, the beneficiary of a scholarship from the BCA study in Europe, has as her priority pursuit of a doctorate degree and to resume her playing career.

National female cricket manager, Gweneth Anthony applauded Layne for her delivery and the boldness in which he addressed the issue of lesbianism.

Layne indicated that while “no one can tell anyone how to live their life, it is wrong for individuals to try and impose their lifestyle on others”.

Anthony is of a similar view.

First vice-president of the SVGCA Denis Byam said the event is part of the thrust to educate and sensitise national players.