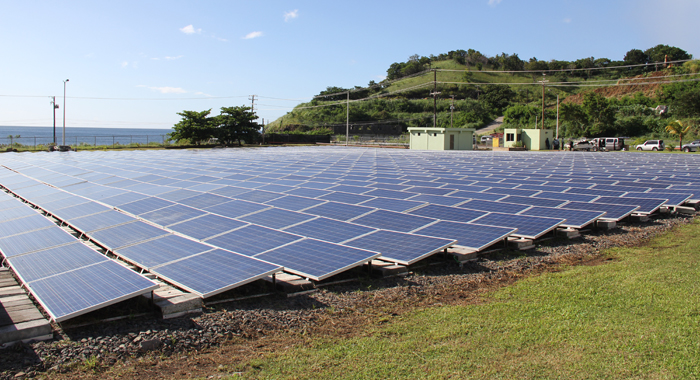 A solar farm in St. Vincent. Employment in the renewable energy industry increased by more than one million jobs in the last year. (IWN photo)

The price of oil has dropped to US$45 per barrel, down from a little more than US$115 per barrel in June last year, triggering concerns that the price drop could scare off investment in renewable energy.

“I think you can look at it as a windfall that buys you time for the transition,” Dolf Gielen, a renewable energy expert with the International Renewable Energy Agency’s (IRENA) told the Caribbean Media Corporation (CMC) on Sunday.

Gielen, who is director of IRENA’s Innovation and Technology Centre, spoke to CMC on the sidelines of the IRENA’s fifth assembly, which is seeking to speed up the global renewable energy expansion to address global challenges including climate change, energy access, energy security, and the power sector transformation.

The cost of generating power from renewable energy sources has reached parity or dropped below the cost of fossil fuels for many technologies in many parts of the world, IRENA said in its landmark report, “Renewable Power Generation Costs in 2014”, which was released on Saturday

Gielen told CMC that while experts agree that the slump in oil prices is temporary, they are unable to say when prices will begin to rise again.

“You can read in the newspapers that there is already a response on the supply side that the drilling for shale oil and shale gas in the US is significantly reduced. You see that a number of oil companies have announced that new drilling for more difficult oil plants has been scaled down…

“So, once this production capacity is not developed, older field age and are taken off because they are running out of capacity, then prices will go up again,” he said.

“But I don’t know whether that is going to be in weeks, in months, or whether it is a couple of years. But I think everybody agrees, prices are going to go up again,” he said, adding that falling oil prices will slow down but will not end transition to clean energy.

“Oil prices will somewhat slow the acceleration but you will see a continued transition towards renewables, but now you have a little more time to plan it and to make sure that it functions well.”

Several Caribbean countries buy fuel for electricity generation through PetroCaribe, the Venezuela oil initiative that sees member states paying for a portion of their oil imports over 25 years at low interest rates.

Some observers in the Caribbean have expressed concern about the continuation of PetroCaribe amidst falling oil prices, although Venezuela says that the programme will continue.

“Venezuela has had problems with keeping up its oil production — which have nothing to do with prices — which are management and political issues. So, I don’t think that that problem will be resolved by lower oil prices, quite the contrary,” Gielen told CMC.

“We’ve in recent years seen a very strong acceleration of renewables uptake in island states, up to a point where we have a little concern about how to co-ordinate such a rapid transition. That’s why we put in place the lighthouse programme to assist in making it an orderly transition,” Gielen said.

Through partnerships and focused cooperation, the Lighthouse Initiative aims to mobilise funding and political will to advance renewable energy deployment in island settings around the world.