‘Run, the grief counsellors are coming!’ 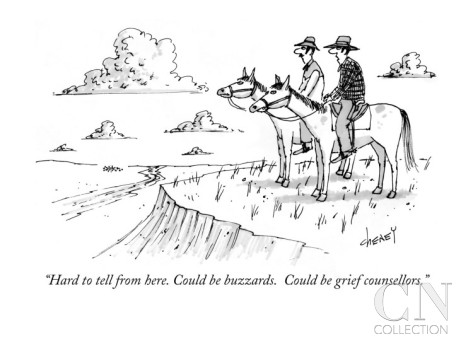 Anyone with a passing interest in psychiatry or psychology knows that both fields of study are full of passing fads, seemingly good theories which simply did not pass the test of time. This is also true of the sub-field of “grief counselling,” a growing industry if there ever was one, full of all sorts of superficially good but untested, often untestable, ideas, often dreamed up by university professors eager to make a name for themselves. For example, “debriefing,” in which psychological trauma victims are urged, sometimes even coerced, to verbally and mentally revisit the trauma over and over again as a method of “healing” is being rejected by many therapists (and professors hoping that their new but untested ideas get accepted instead) because it is now believed that it does more harm than good.

The latest fad is a method called “psychological first aid,” which emphasizes giving patients space instead of pushing them to relive the event.

In a few years, of course, it will be displaced by some other technique.

I suppose many people will call me old fashioned (actually I am pretty old) but I simply reject the whole “grief counselling” business — and it actually is a profitable business for the growing number of people engaged in it — except in cases where there is no alternative.

For the grieving people of Fancy there are lots of alternatives. I don’t know Fancy well having visited the village briefly only three times in the past 40 years. But what I have always heard and am now being told by the media, following last week’s horrible tragedy, is that it is a close-knit community where everyone knows and is related to everyone else. If there ever was a place that has the strength, shared culture and history, resilience to adversity, and collective sense of identity to cope with this tragedy, that place is Fancy.

And who better to share their grief with and seek counselling from than loving family, best friends, good neighbours, caring teachers, and compassionate pastors, ministers, and other religious leaders?

But, no, this proven traditional form of grieving and healing is not good enough from the busybodies at the Ministry of Health who want to augment local “grievance counsellors” with foreign psychologists (See: Foreign psychologists to counsel persons affected by Rock Gutter tragedy)

Yes, let’s just send in a bunch of strangers from other lands with no knowledge of the people or their culture because the residents of Fancy are too mentally weak or too uneducated to heal with and on their own.

It is past time for all Vincentians to recognize that not every fad and idea coming from overseas is a good fad or idea. This is especially true of clinical psychology and psychiatry, two fields that have a long way to go before they can claim to have a precise, scientific understanding of the human condition.

There is an oft-repeated satirical expression that says it all: “Run, the grief counsellors are coming!ben-David

8 replies on “‘Run, the grief counsellors are coming!’”