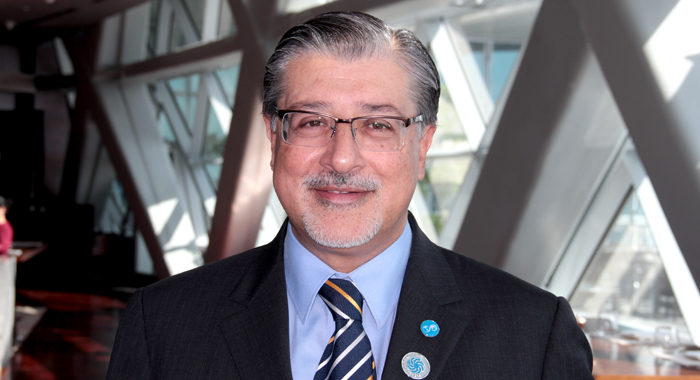 ABU DHABI, United Arab Emirates, Jan 21, CMC – The head of the International Renewable Energy Agency (IRENA) says that while the Caribbean is often grouped together with Latin America, the archipelago does have “particular” challenges in its efforts to transition to renewable sources of energy.

“We are providing them support from areas of grid integration to capacity building to understanding the cost of technology. The change is coming, it is going to be dramatic,” he told CMC on the sidelines of Abu Dhabi Sustainability Week (ADSW).

ADSW is an annual global forum brings together over 30,000 professionals thought leaders, policy makers and investors to address the challenges of renewable energy and sustainable development.

Ahead of the two-day IRENA Assembly on the weekend, Bahamas Environment Minister, Kenred Dorsett, told CMC that he would like to see special attention given to CARICOM counties as opposed to grouping them with Latin America.

“… I think that’s very, very important for us as region, as we move to ensure that CARICOM itself is a region of focus for IRENA, that we are not consumed in the entire Latin America region and there is not sufficient focus on us,” he told CMC.

“I think it is incredibly important for small island developing states within CARICOM to be identified. The reality is while we are all addressing the issues of the deployment of renewable energy technology and we are addressing issue of climate change, I think CARICOM as a body and as a region needs to have its voice heard and to ensure that that voice is able to translate into programmes specifically targeted at the region,” he said.

But Amin told CMC that IRENA is “trying to develop a new type of institution for a new time.

“So we don’t have political straightjackets on who is in which region. The general nomenclature is Latin America and the Caribbean, everybody groups it together, but we all know how different the challenges are,” he said.

He said IRENA has a very dedicated effort to address the energy needs of islands, and has started in the Pacific islands, which were early members of the agency, and is now moving into the Caribbean.

“We are working in Antigua and Barbuda, Barbados, Grenada, Jamaica. We know that the islands’ challenges are very particular. We have developed a lot of expertise in doing that, and we know in a general sense the challenge they face is quite different from mainland Latin America. So we see them as logically separate entities in what kinds of strategies we will have,” Amin told CMC.

He said that among the special challenges in the Caribbean are the arrangements that government have made with some private sector suppliers of energy.

“For example, many of the utilities are foreign owned and they negotiated 75-year-long, cast-iron guarantees on their existence. They were making money off diesel, they have no incentive to move to renewables, but we are moving ahead,” he said, noting that IRENA last weekend announced a US$15 million loan to St. Vincent and the Grenadines to help fund its geothermal project.

“That is going to make St. Vincent and the Grenadines 80 per cent self-sufficient in energy overnight. It changes lives. So, we know there are different types if solutions for islands and for Latin America, and the approaches are quite different,” he told CMC.