Funeral of Rock Gutter victims to be broadcast live on radio, TV, Internet 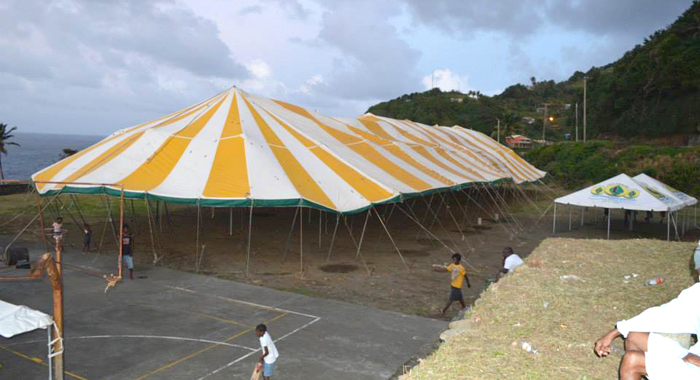 The site in Fancy where the funeral service will take place. (Photo: Duggie “Nose” Joseph/Facebook)

The joint funeral tomorrow, Sunday, Jan. 25, of the five students who died when the minibus plunged into the sea at Rock Gutter on Jan. 12 will be broadcast live on radio, television and the Internet.

Further, the government will make special arrangements to transport persons between Owia and Fancy, where the funeral will take place at Fancy Playing Field at 11 a.m.

Cabinet Secretary Kattian Barnwell said at a press briefing on Friday that persons attending the funeral are being asked to be seated by 10:45 a.m. to ensure a prompt start.

She noted that parking spaces will be limited in Fancy, in addition to other restraints and considerations.

“So, just for the members of the public who are desirous of attending or following the proceedings to realise that large numbers of persons in that area will present particular challenges, and, with that, I guess persons will make a decision as to what will happen on Sunday, particularly those who may not be that be very directly related to the area, to the community,” she said.

“We appreciate the concern, the expressions of solidarity, and, on behalf of the Government, I’d like to thank the entire nation for being there for the families and the affected community,” Barnwell further told reporters.
She said the service will be in memory of the five students who have been confirmed dead and the two who are still missing.

Chanstacia Stay and Simonique Ballantyne are missing and presumed dead.

The students will be buried at the new cemetery in Fancy, which was consecrated this week.

Barnwell said a free shuttle service will be provided between Owia and Fancy from 9 a.m.

“We are encouraging as many persons as possible to park in Owia in the areas designated by the police,” she said.

Emergency health services, including teams of doctors and nurses, and two ambulances will be on site in Fancy and the health centre there will be opened.

The Georgetown Hospital will be on standby and Red Cross personnel will be on duty to provide support in Fancy.

Barnwell said tents will be set up in the area of the playing field, including a tent belonging to the Seventh Day Adventist Church, which can seat 2,000 persons.

Staff from the Ministry of Foreign Affairs will provide protocol services, including ushering.

Barnwell said the government is mindful that the service is planned for 11 a.m., the time of day when the heat would be most intense.

“… we don’t want persons to become dehydrated. We are asking that persons take along water with them, and we are also letting the public know that bottled water will be provided on site through the generosity of ECGC, NEMO and the Red Cross.”

The washroom facilities at the school will be made available to the public and will be supported by portable units that will be placed in the vicinity of the playing field.

Live coverage will be provided by NBC Radio, VC3, Star Radio, Garifuna Radio, and We FM.

The service will also be streamed live on the flowing Internet platforms:

“Now, we are doing everything to provide the requisite logistical support so that the service can proceed smoothly and also those present can be as comfortable as possible in the circumstances. We expect the full cooperation of the public, and, again, we will all be there in full solidarity with the families to show our last respects to the lost loved ones,” Barnwell said.

“I know as Vincentians we are very cultured, we are very sophisticated and the proceedings are going to be very respectful of the deceased and the families and very dignified in a way that is very appropriate to the circumstances,” she said.

Meanwhile, head of the Traffic Branch, Superintendent of Police Kenneth John, said police officers will be deployed early Sunday morning and will line the road between Owia and Fancy.

“They are there to provide traffic direction, so I am asking the general public to comply with the direction of those officers who will be along the road.”

He said that on reaching Owia, motorists have the option of parking there, and officers will direct them accordingly.

“None of these vehicles will be facing the Fancy direction,” John said, adding that parking will be prohibited in the area of the playing field.

He said an area immediately near to the playing field will be provided for emergency vehicles only.

Along the route between Fancy and Owia, the vehicles will only be allowed to park along the left hand side of the road.

There will be a space between every 17 vehicles so that if traffic is coming the opposite direction, they can use that space to allow the traffic into Fancy to flow, John said, adding that there will also be areas where vehicles can turn around.

“All the traffic will not be able to go into Fancy. … There are certain areas where the officer will turn you round, and you will take a shuttle bus from there.”

John said there will be over 20 shuttle buses.

At the end of the funeral, the shuttle buses will not leave Fancy until all the persons requiring their services are transported back to Owia, John said.

He said he and a gazetted police examiner who is also a mechanic have inspected each of the shuttle buses to ensure that they are safe, roadworthy, licensed and insured.

“We are not going to allow persons to use vehicles that are not roadworthy and are not licensed to do the shuttle,” John told the press briefing.

He said no vending will be allowed along the public road between Fancy and Owia.

“A special precaution to all motorists. We have to remember the road between Fancy and Owia is narrow, it’s winding, it has steep inclines. We are calling on the general public, especially motorists, to exercise all caution when travelling to and from these areas,” John said.

‘Security will be paramount’

Meanwhile, Deputy Commissioner of Police Reynold Hadaway told the press briefing that security will be paramount at the event and police will try to eliminate the occurrence of untoward events.

He said police are anticipating a large turnout to the funeral and have factored that into their planning.

“ACP Benjamin, our operations officer, has put the machinery in place and plans are [at] an advanced stage to ensure the safety of everyone … is taken into consideration throughout, up until the end of the funeral service,” Hadaway said.

“We want to encourage persons to be calm throughout, as we pay our last respect to our loved ones who have succumbed to the fatal accident at Rock Gutter…

“We are striving to ensure that no untoward incident occurs between Sunday morning and Sunday evening, when everything should be finally over.

“Our officers are presently on the ground and they are making evaluation of the situation and will be feeding us with information so that we can finalise everything.

“But I can guarantee that we want to see persons turned out to the funeral and there should be no untoward concerns for person with regards to their personal safety, their property and so on,” the deputy police chief said.

He, however, asked persons to be “very mindful of the environment and not to leave things exposed where it would attract persons — your personal property, take very good care and ensure that they are secure,” Hadaway said.

4 replies on “Funeral of Rock Gutter victims to be broadcast live on radio, TV, Internet”