Vincentians reminded to immunise children against measles and other diseases 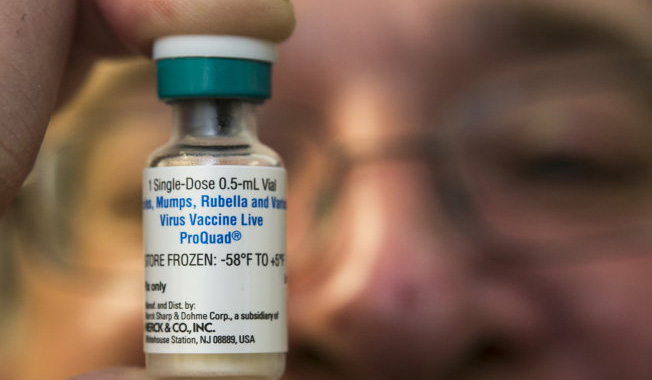 Persons in St. Vincent and the Grenadines (SVG) are being reminded that immunisation for children against certain vaccine-preventable diseases, including measles, is offered at no cost at Government health centres across the country.

Chief Medical Officer Dr. Simone Keizer-Beache is, therefore, urging parents who have not yet fully immunised their children or those who are due their booster shots to do so immediately.

Focal Point for Communicable Diseases and Immunisation in the Ministry of Health, Wellness and the Environment Ferosa Roache says there is no need for residents of SVG of be fearful as the country has been free of the endemic (local) transmission of measles since 1991 because of the success of the Expanded Programme on Immunisation.

She, however, said it is important to note that measles was declared eliminated (i.e. interruption of year-round endemic transmission) in the United States in 2000, because of high population immunity achieved by high 2-dose measles vaccine coverage and a highly effective measles vaccine.

However, measles is still endemic in many parts of the world, and outbreaks can occur when unvaccinated groups are exposed to the imported measles virus.

Raoche that before the introduction of the measles vaccine, nearly all children contracted the disease.

Citing data from the most recent verification report done in 2011, Roach added that in 1988 CARICOM ministers of health met and declared that indigenous measles should be eliminated in the Caribbean sub-region by 1995. This decision resulted in several vaccination strategies being implemented by several Caribbean countries, including SVG.

The report further indicated that in May 1991, in response to this 1988 CARICOM resolution for measles elimination, a measles mass   vaccination campaign was conducted. Some 38,136 children 1 to 14 years were targeted and 38,116 of them were immunized using the MMR vaccine. The coverage attained was 99 per cent.

Persons born in 1991 and onwards had at least two opportunities to be immunized against Measles and Rubella through the routine first dose of MMR, Measles Catch-up, Rubella mass campaign and the second follow-up campaign of 1999, and also the MMR 2-dose, which was introduced in 2001. This coverage is considered adequate for the elimination of Measles, Rubella and Congenital Rubella syndrome.

A surveillance system for suspected measles was also established in 1991. This surveillance system identified 14 cases of fever and rash between the periods 1996 –2001. These cases, however, were negative for measles on laboratory investigation. No laboratory-confirmed cases of measles have been reported since 1991.

Roache further added that the Government of SVG is committed to sustaining the programme gains achieved by the Expanded Programme on Immunisation. She said that there are human and financial resources allocated to the programme and a supportive legislative environment that promotes immunisation of children as a requirement for school entry. Maintenance of the vaccination coverage of 100 per cent for all antigens included in the national schedule is accorded a high priority.

Underscoring this country’s readiness to combat any outbreaks which may occur when unvaccinated groups are exposed to the imported measles virus, Roache said that in 2011, a team of professionals in the Ministry of Health, Wellness and the Environment completed the verification process of elimination of Mumps, Measles, Rubella and congenital Rubella syndrome.

SVG has met all of the criteria set out by the WHO and has a national immunisation coverage of over 95 per cent against MMR.

This coverage is considered adequate for the elimination of Measles, Rubella and Congenital Rubella syndrome. A report was submitted to PAHO/WHO and we are awaiting certification.

Compulsory immunisation for children begins at birth and continues until age 10.