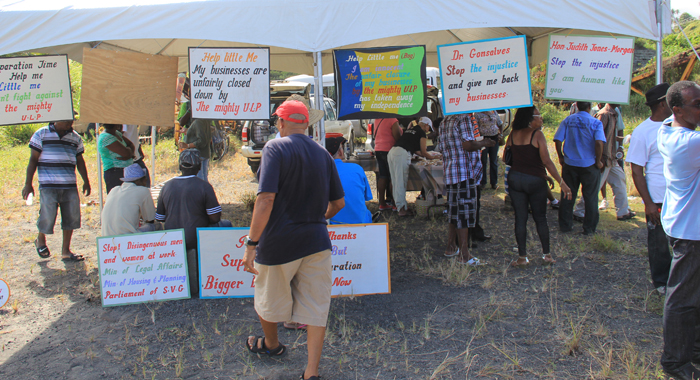 Businessman Leon “Bigger Bigs” Samuel on saturday displays the placards he used in his bid to get his mining licence back. (IWN photo)

Businessman Leon “Bigger Bigs” Samuel says he does not think that his legal team failed him, allowing the government to say, four years after ordering him to decommission his crushing plant at Rabacca, that he does not need a licence to mine aggregate there.

Rather, the embattled businessman says he thinks he received sound legal advice, including not taking the government to court over the matter.

He told reporters on Saturday that on the contrary, the licence saga exposes the incompetence of the government.

In February 2011, citing environmental impact, the Ralph Gonsalves government revoked Samuel’s licence to mine aggregates on lands he own at Rabacca and ordered that his crushing plant there be decommissioned.

After a protracted battle by Samuel, which included lobbying and public protests, government officials told Samuel in December that he does not need a quarry licence to recommence operations at Rabacca, noting that there is no use of explosives there.

“I would not say that my legal team has failed. I believe to myself I have been given the best legal advice,” Samuel said at an event at the site at Rabacca, where he outlined to the media and the public the challenges he faces in recommencing his business.

“My legal team knew that (no quarry licence was necessary),” Samuel said.

“… when he (lawyer) did his research, he said, ‘Bigger, as far as I could see, you wouldn’t fall under the category of a licence’, but we are just going along with the authority, because we wanted to please them so that we can get our business up and running in the quickest possible time,” Samuel said.

“So, it’s the government now, in the process now has put themselves into this predicament to the public to show the public that they themselves are very incompetent in what they are doing — they and their technical team,” Samuel said.

“… it took the government four years, after they close me down, four years, to now figure out that I [don’t] really need a quarry licence, because what we are doing out here is not quarrying in its true sense, because, as you can see, what we have out here is sand and gravel. You are going to find a few boulders here and there during the time of mining, but we [do not] use explosives,” Samuel said, adding that explosives have never been used at the site.

But Samuel said he does not plan to seek legal redress for what, on the face of it, seems an illegal act by the government.

“To be honest with you, the good Lord in heaven and the people who are here as witnesses today and the press, so far, have been able to bring the issue thus far so that we can get back our licence. I personally believe that the press and the people here, and the good lord in heaven, with the strength he is going to give to me, is going and press the government to restore the business,” Samuel said.

He told reporters he believes that the action taken against him was a result of a mixture of incompetence and political action.

“And they use their incompetence in order to achieve their political action,” he said of the government.