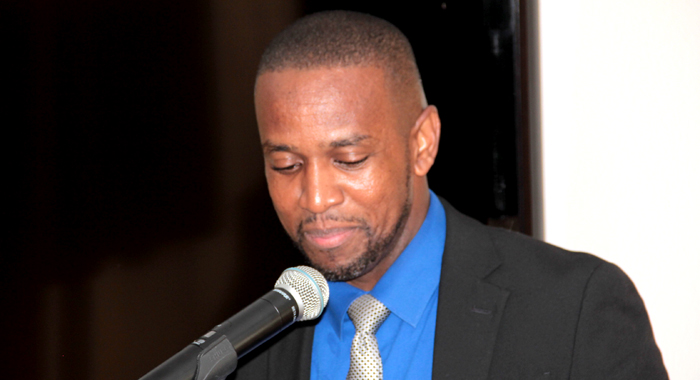 Senior Branch Manager at CIBC FirstCaribbean International Bank (FCIB), Andre Cadogan last week attempted to explain at a Chamber of Industry and Commerce event why the bank has increased its fees.

But Carlita Daniel, a former client of the bank, used the opportunity to tell the bank official that poor customer relations contributed to her decision to closed her account after the rates were announced.

At the CIC-organised event, which was sponsored by FCIB, accountant Brian Glasgow and Reuben John of the accounting firm of KPMG gave an overview of the 2015 National Budget.

Over the past few months some banks have increased the fees they charge their customers.

Glasgow deferred to Cadogan when he was asked what impact increased bank charges are likely to have on the economy.

“… we are a business; we review our approach to banking every so often and services charges are just one of the areas that we had to review, and one of the things we are doing as a bank is making sure that we reinvest in what we offer to the customer,” Cadogan said.

“The different platforms that we use for you to do your banking, the different services, improvement of what we deliver as a product — some banks have gone through significant renovations to make the environment more conformable.

“Basically bring banking into the 21 Century in St. Vincent and there are various costs that go into running an organisation, and service charge just happens to be one of those. That’s the best I can address it,” he said.

“… we tried our best to address it in as many forms as possible leading up to the charges. There was a significant amount of press that came out on the charges, not only from us, but from commercial banks across the board in St. Vincent,” the bank manager told the gathering.

But Daniel, commenting from the floor, expressed displeasure with the letter that FCIB sent out to its customers leading up to the increased charges.

“I was a customer at your bank and the letter that you sent out, … I found it really unfriendly. It basically said to me we are going to be putting charges in place, if you don’t like it, you can let us know by 31st December; but if not, you can always, basically, take your business elsewhere. That’s what that letter said, and I found that completely unacceptable as any kind of customer relations, and that’s why I close my account; not because of your charges, but because of the way it was communicated to me,” Daniel said.

She also pointed out that while she lives in St. Vincent, the letter took three months to get to her, having travelled all over the region.

In his response, Cadogan said he would have loved the opportunity to talk to Daniel about that letter.

“I tried — spending half an hour waiting for somebody to come to the inquiries desk so I can inquire to whom I can complain,” Daniel responded.

“The letter you are referring to, unfortunately, … from conversations I had with other persons, seems to have been misunderstood, because that letter actually didn’t indicate changes that we have implemented,” Cadogan said.

“What that letter wanted to advise was that because we have responsible of disclosure, we were moving some of our functions from a front office to a back office, and, therefore, some would be outsourced. And we needed to advise you that we were outsourcing. At the same time, we mentioned there other charges — that we are in the process of actually look at other charges

“I am really sorry that we didn’t get a chance to talk before,” the bank manager further stated.

“It’s wouldn’t have made any difference,” the former client responded, triggering some laughter from the gathering.