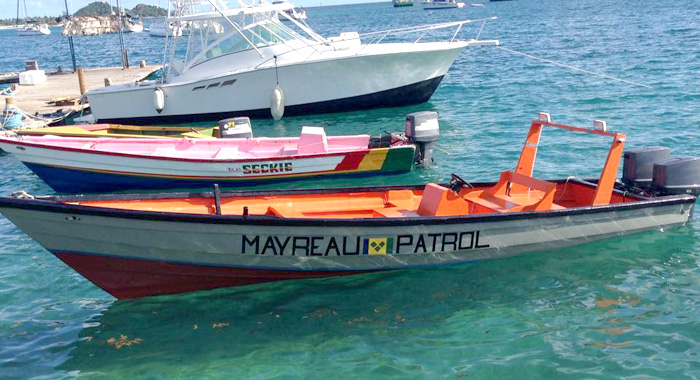 Residents of Mayreau are expecting 2015 to be a safer year for residents of and visitors to the southern Grenadine island, thanks to a successful partnership that got the Mayreau patrol boat back in the water.

“As we begin a new year here on Mayreau, we’re grateful to all those who helped us get our patrol boat repaired so we could re-launch it,” Constable Owen Isaacs said.

“The patrol boat is now back in action providing timely transportation to emergency medical care, safety in our bays for visiting yacht and cruise ship passengers, regular patrols in the Tobago Cays Marine Park and much more,” he said.

Among the many persons and entities who helped out is the staff of the Tobago Cays Marine Park.

“This accomplishment simply wouldn’t have been possible without the involvement of the Marine Park,” said Isaacs.

“In addition to the expert recommendations on repairs and materials from Albert Hanson, we also very much appreciate the donated fiberglass liquid, plywood, sandpaper, paint brushes and fuel, not to mention the engine the Marine Park provided.”

Mayreau residents also stepped up and played important parts in the project. Local businessmen Dennis Forde and Evlyn (Bonnie) Forde paid for the electricity used during the repairs; Glenroy Forde donated the spotlights; Aaron Alexander, James Alexander, Victor (Bertam) Hazell and Owen Isaacs volunteered to overhaul the engines as well as complete the repairs and repainting of the boat itself. Restauranteur Alexander (Zannie) Adams fed the volunteers.

“The Coastguard donated an engine as well as fiberglass liquid for repairs, while the Marine Park and Canadian businessman Chris MacLean contributed the second engine. In addition, a visiting yachtsman provided the antifouling we needed,” Isaacs said.

The patrol boat has proven its value over time. “When we previously had the patrol boat up and running for five years, there were absolutely no yacht break-ins here in Mayreau waters,” Isaacs revealed. “And, as we’re the closest island to the Tobago Cays, we expect we’ll continue to be called upon to respond to incidents there.”

Isaacs said he hopes the partnership that re-launched the patrol boat will help keep it in operation.

“Our biggest concern as we move forward is the on-going costs for fuel, preventative maintenance and repairs,” he said.

“We can’t do it alone, so we’ll be calling on all those who benefit to help cover the expenditures.”