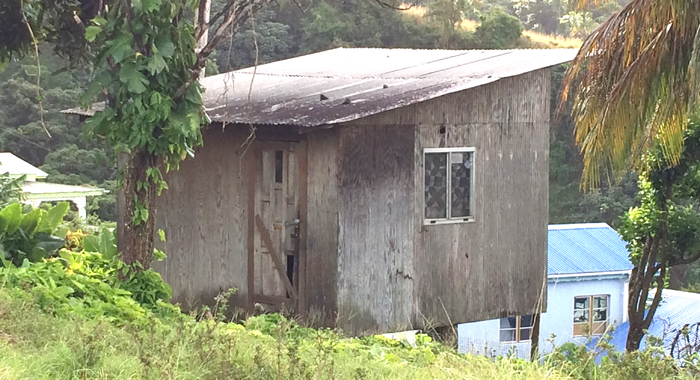 The man was shot inside this house in Redemption Sharpes. (IWN photo)

Police on Saturday shot and injured in Redemption Sharpes a man who is said to have a history of mentally illness.

Residents of the Central Kingstown community told I-Witness News that a police officer living in the area summoned his colleagues after the man reportedly tossed a concrete brick at a female villager.

Villagers say that the man attacked the four police officers dispatched to the scene, who entered his house to apprehend him.

He is said to have taunted the officers, telling them, “Shoot me! Shoot me!” as he charged at them with an object in his hand.

One villager, who did not give his name, told I-Witness News that he assisted the police officers by using a light to illuminate the inside of the man’s wooden house as the police tried to apprehend the man.

He said that last year he rescued the man’s mother from a chokehold in which he held her when she visited him.

“I don’t like police, but I understand why they shot him,” the man told I-Witness News, adding that the man was still wrestling with the police even after being shot in the leg.

Villagers say that a Sharpes resident is still recovering from a chop wound to the hand reportedly inflicted by the man some time ago.