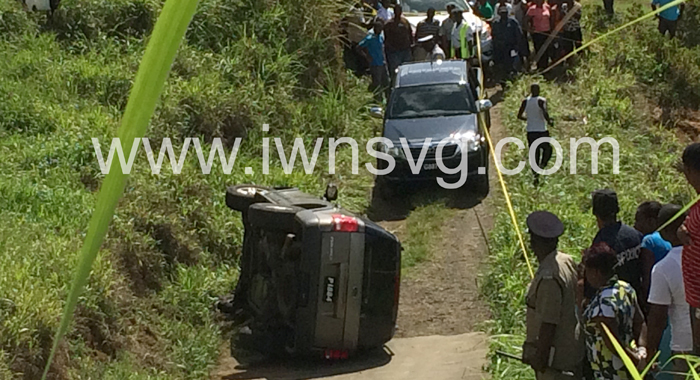 Akisha Henson was sitting in the front passenger seat of the left-hand drive vehicle when it overturned.

A 28-year-old Port Authority clerk died Thursday in Mt Grennan when a private vehicle overturned around 7:10 a.m. while travelling in the direction of the main Windward Highway.

Superintendent of Police Richard Browne said the woman has been identified as Akisha Henson of South Rivers.

Henson was seated in the front passenger seat of the vehicle.

“He was driving motor vehicle P1884 from his home and on going down a hill. The information I have is that he is alleging that his brakes failed,” Browne told reporters at the scene.

“There was an oncoming vehicle and the road is very narrow and only allows for one vehicle at a time, and he attempted to bank the vehicle on the left side of the road, the vehicle overturned and his [friend], Keisha Henson, a 28-year-old Port Clerk of South Rivers was with him and received injuries and died on the spot as a result of the accident,” Browne said.

He said that Rodney did not sustain any injuries as a result of the incident.

He said police have launched a motor vehicle investigation as a result of the incident.

“We do not know at this time whether a charge or charges will be brought against the driver. We’d have to do a thorough investigation because he is claiming brake failure,” Browne said.