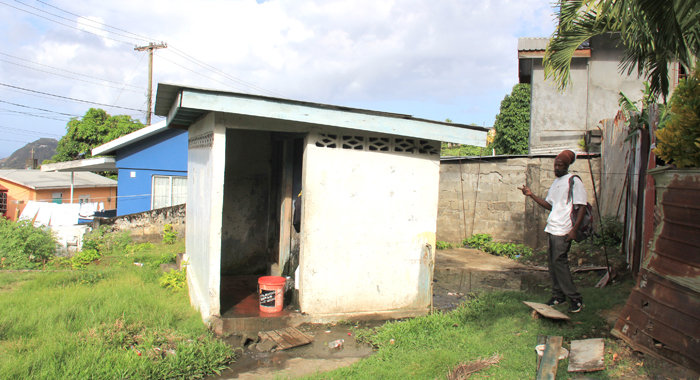 The public baths in Redemption Sharpes and Block 2000 will not be repaired, in keeping with the government’s decade-old policy to phase out these facilities across the country, Minister of Health, Wellness and the Environment Clayton Burgin told Parliament on Tuesday.

The announcement came half year after Physical Planning authorities put the brakes on efforts by residents of the community to repair the bath.

Redemption Sharpes resident Garnet Browne told I-Witness News on Monday that he believes the authorities ordered them to stop the repairs because Central Kingstown representative, St. Clair Leacock, an opposition lawmaker, might have gotten “political mileage” if the bath were repaired.

Leacock had supplied the building materials that were being used to repair the facility before the repairs were halted.

The stop notice came after a visit by then Minister of Works, Sen. Julian Francis and businessman Beresford Phillips, a local newspaper has reported.

Phillips hopes to become the ruling Unity Labour Party’s candidate in Central Kingstown for the next generally elections, constitutionally due in March 2016, but widely expected this year.

“It (repairs) woulda finish by now if they had ‘llow the people to do the thing. I don’t see why they stepped in, because it was benefit for the people; it’s not to say Leacock. Maybe it’s Leacock they trying to fight against, but it wasn’t say Leacock benefitting because Leacock have he bath home,” Browne, a mason, who does not use the bath but assisted with the repairs, told I-Witness News.

In his question in Parliament on Tuesday, Leacock asked Burgin to say if he intends to complete repairs to these baths, build washing facilities and provide privacy to the users of these public baths in the course of the year.

Burgin noted that not many public baths still exist across the country, adding that his ministry monitors those that remain and persons are still employed to clean them.

“May I, however, Mr. Speaker, remind this Honourable House that public washrooms were to be closed,” Burgin said.

He said that between 2001 and 2002, the ULP administration outlined its policy of free water connection to household throughout the country with public baths and standpipes to be gradually phased out.

“But they emerged as health hazards, being generally abused by many persons who also use them for laundry purposes and other purposes beyond those.

He noted that the government removed the metre charge for the elderly who benefit from Public Assistance.

Burgin said the policy has not changed. “My ministry will, therefore, continue to facilitate the full implementation of the said policy. I, therefore, urge the complete understanding of this Honourable House and every citizen of our blessed nation in this regard.”

But Leacock accused Burgin of not answering the question, telling Parliament that what he heard was the minister saying that public baths represent a hazard, especially since washing is done there.

“Would the bath in Sharpes, Block 2000 be repaired this year?” Leacock asked.

“I said there is a policy to phase out public baths and standpipes and that policy still stands,” Burgin said.

I-Witness News visited Redemption Sharpes on Monday to report on the shooting of a “mentally ill” man by police.

Browne used the opportunity to invite I-Witness News to visit the bath and pleaded for improvement to the facility on behalf of his fellow villagers.

He said that he was among persons who assisted in the repair works.

He told I-Witness News that he does not live close to the bath and does not use it, but was especially moved recently when he passed in a van and saw the “nakedness” of a woman bathing inside the bath, which has no doors.

Before the works were halted, residents had built a concrete platform to the back to erect two sinks for washing, and a retaining wall to the front to shore up the area.

And while the government has a policy of phasing out public baths, Browne told I-Witness News that he thinks the one in Redemption Sharpes is “really necessary”.

“It is needed in the community. I say even if they stopped Leacock feeling that he woulda get little political mileage, they coulda send somebody and fix it, because look at the condition.

“People when they are bathing you seeing them from all in the road. It need a little door, it need a little sink. Sometimes you meet people washing at the side of the bath, the soap thing from the washing creating a whole heap of stench. So I figure they coulda do something. Just send somebody and build the little sink and do that for the people feel irie because it is benefit for the people,” Browne said.

“Just do something, please. They get all kind of board and galvanise giving away all over the place,” he said of the government.

“Just sponsor two pieces of board and galvanise and let the people feel comfortable, because a lot of people don’t have water in their yard. The bath is the main thing they have to use, and it in a deplorable condition,” he said.

Browne told I-Witness News he believes the bath needs to go back on the front burner of issues in the community.

“Even I will contribute my self-help just to see it finish, because the other day I passing down in a van, I see a woman’s nakedness in the bath, because it don’t have no door and she have to take she towel and try hang it up to hide sheself but yo’ still see all she nakedness exposed from in the road, and that is real bad. Just gi’ we a bath; gi we the little material leh we finish the thing and feel irie,” he told I-Witness News.