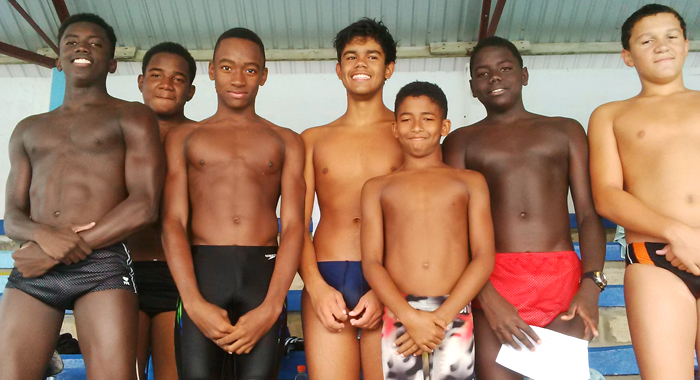 Whilst up against the very best swimmers from Barbados,

Sylvester brought home one gold, two silvers and one bronze medal after competing in eight events, proving he is still one of the region’s top swimmers.

Fourteen-year-old Cruz Halbich stepped up to the challenge of competing in the longest event raced in a pool, the 1,500 meters. This was Cruz’s first time racing at this distance and with his nerves set to one side, Cruz complete the 30 lengths in pole position winning gold in his age group.

Swimmers Alex Joachim and Shane Cadogan found the Bajan competition a real challenge because both swimmers have moved up an age group — the 11-12 years age group — this year.

This means they are the youngest in their age group of a two-year difference.

Personal best times were achieved by Chavez Joseph, Dillon Gooding and Justin Sylvester, though they were unable to make the medal podium this time.

“The results of this event were very positive on all accounts. Its extremely satisfying to see our swimmers clinch medals at an event of such high standards and it is also a great indicator to myself and all of our swimmers of the levels of hard work they need to put in for the rest of the year to be able to stay medal contenders at future regional and international competitions,” coach Kyle Dougan commented.

“This was a great start to 2015 for Black Sands and St Vincent. The sport of swimming has made waves in St. Vincent and it’s proving that we are an island gifted with some fantastic natural talent,” he said.

He also encouraged more people to get involved in the sport, saying they can do so by contacting him at 784-532-9462”

One reply on “Black Sands swimmers bag medals in Barbados”