Fishers affected by 2013 disaster to receive assistance this month 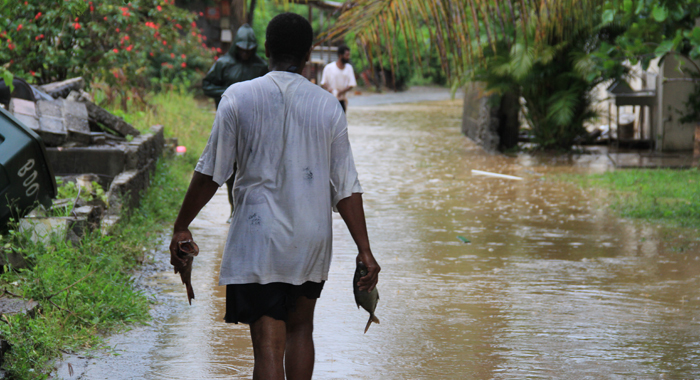 Fishers who have already replaced their equipment will also receive assistance. (IWN photo)

Fishers who suffered loss or damage to their equipment as a result of the extreme weather on Christmas Eve 2013 will receive assistance by the end of this month.

However, fishers who have replaced their equipment or fixed their boats will not be barred from receiving assistance, since the assessment was already done, Minister of Fisheries, Saboto Caesar told Parliament last week.

He was responding to a question from Member of Parliament for North Leeward, shadow minister for agriculture, Roland Matthews, an opposition lawmaker.

A trough system on Christmas Eve 2013 left loss and damage in St. Vincent amounting to EC$330 million according to government estimates and EC$270 million, according to the World Bank.

Caesar said the impact on the fisheries sector, however, “may be characterised as small,
with total damage estimated at 383,650 dollars”.

He said most of the damage occurred in North Leeward and on the west coast of St. Vincent.=

Several fishing boats and engines were either lost or damaged in the areas of Biabou, Calliaqua, Chateaubelair Fitz Hughes and Coulls Hill, and one aquaculture farmer suffered loss valued $10,000

He said it will cost the state about a quarter million dollars to respond to the damage and loss.

The delay in responding has been for two reasons, the minister told Parliament.

After the storm, some fishers wanted to upscale their operations and sought the assistance of the Ministry in ordering the requisite equipment.

“This is in the concluding stages, since the equipment has been sourced,” Caesar said.

The Ministry has recently received confirmation from two international organisations, which participated in the assessment work.

Although the ministry has the money to fund the replacement, the Ministry did not want to purchase the equipment since there was a commitment from these organisations, Caesar said.

He said there also a delay in assistance to cattle farmers since and the ministry and sought an expert in artificial insemination out of Cuba, who arrived in SVG three weeks ago.

“Therefore, the cattle farmers who … suffered in the December floods have not yet received the assistance. It doesn’t mean that we are not doing work in providing the assistance and the framework under which this assistance will take place. However, in these matters sometimes we have delays in deliverables.”

Caesar said his ministry has the names of all the persons to be assisted and the Permanent Secretary was slated to meet with them last week.

The two sources from which assistance would be received are the grant component from the PetroCaribe Fund, which is in the Farmers Support Co., and $1 Million to be assigned this year for grants assistance.

The first tranche of money assigned to the Farmers Support Co. included an EC$750,000 grant for farmers and an EC$1 million grant budgeted this year.

There is also EC$1 million to assist small operators who lost boat and equipment as well as infrastructure on the shoreline that was affected, Caesar told Parliament.