‘Reservations’ about aerial spraying against Black Sigatoka in St. Vincent 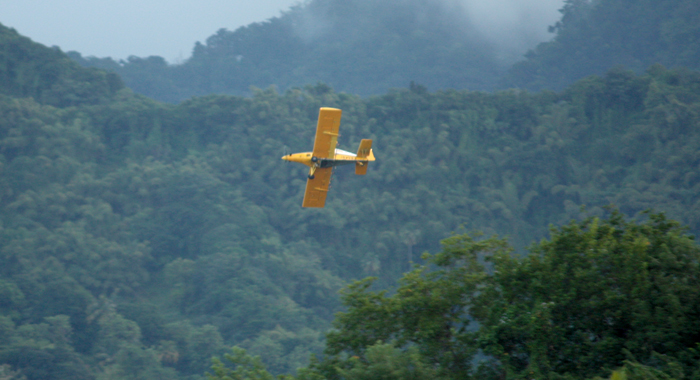 An aircraft sprays banana fields in the Buccament Valley on Dec. 4, 2013. (IWN photo)

The Ministry of Agriculture says it has “reservations” about using aerial spraying to control Black Sigatoka, a disease of bananas, plantains, and similar species, that causes the leaves to wilt and fruits to ripen prematurely.

Black Sigatoka is controlled with frequent — often-aerial — applications of fungicides, and cultural practices, such as the removal of affected leaves, and adequate spacing of plants and efficient drainage within farms.

But Minister of Agriculture Saboto Caesar told Parliament last week that his Ministry has its own concerns about aerial spraying of banana farms in St. Vincent.

Caesar, however, said his ministry will continue with the six cycles of aerial spraying this year.

“But the Ministry of Agriculture, we are making it known that we have our reservations about using aerial spraying because you have not as you have in Central America where you have isolated plantations. We have villages where there are pockets of banana fields, and when the aerial spraying is taking place, it is impossible for the pilot not to apply the spraying of the chemical as he is passing over schools, and also over homes,” Caesar said.

“I want that to be known especially since there are persons who are making a case for increasing the number of cycles. Some persons would wish that we have 10 cycles or 15 cycles, but it is the Ministry’s reservation that we should limit it to six,” he said as he responded to a question from Member of Parliament for North Leeward, Roland Matthews, and opposition legislator.

Caesar said he has worked with his ministry over the last few years in addressing Black Sigatoka.

“And we are taking it off a rugged political path. At the end of the day, the control of the Black Sigatoka disease is a science … We really have to, as a country, as we work on such important national issues, engage our students.”

“We have to have the students at the Community College and the students who are overseas studying in these fields to become engaged.

“Citizen engagement is critical if we are going to solve many of these vexing problems,” Caesar said.

He told Parliament that St. Vincent and the Grenadines, like the sub-regional grouping, the Organisation of Eastern Caribbean States, and the larger Caribbean Community, did not have the scientific capacity to address Black Sigatoka and sought assistance from the Food and Agriculture Organisation.

Over the last two year, the country has been able to keep the Cronshaw level under 2, Caesar said, adding that this is an average, because in some areas it is above 2 because of climatic conditions.

“And we are focusing on those areas. In fact, we have called them the hotspots for Black Sigatoka, and we are addressing that,” Caesar said.

Cronshaw method provides information on the occurrence of early Sigatoka stages on the youngest leaves and gives indications of the rate of disease development.

It has the advantage of showing quick response to fungicides application and can predict outbreaks of disease.