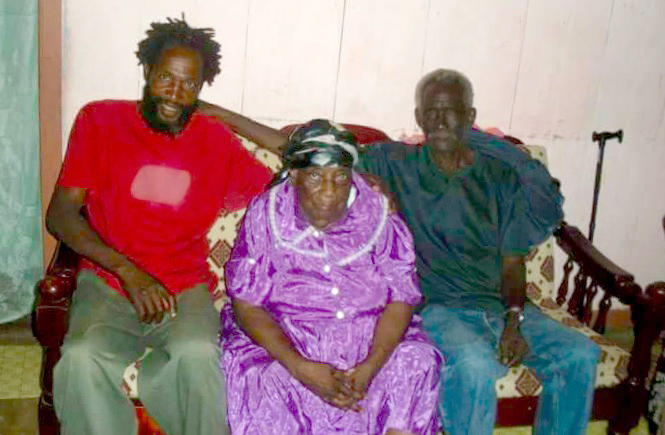 In this undated photo, the deceased, Sylvanus Robinson, left, is seen with other Vermont residents.

The sister of a farm worker in Vermont whose decomposing body was found a week after he was last seen making his way to the mountains where he tended cattle, says they want justice.

A post-mortem was conducted on Tuesday.

Head of the Major Crime Unit, detective Inspector Trevor Bailey told I-Witness News on Thursday that while he is yet to see the death certificate for Robinson, his demise does not appear to be a homicide.

Bailey said earlier this week that Robinson’s death was being investigated as a suspected homicide, pending the autopsy report.

He told I-Witness News on Thursday said he was told that the pathologist found that Robinson had an injury to the spine but no other physical injuries.

Robinson’s body was found days after searches by police and members of his family proved fruitless.

He was found some hours after farmer and Vermont resident, Philmore Simon, smelled a foul odour and reported it to Robinson’s family, who summoned the police.

Robinson worked tending cattle for his sister’s ex-brother-in-law, Christopher Bentley, a resident of Top Village, Vermont who is unable to go to the mountains himself.

Robinson’s sister, Lylian Slater, who lives in a Sugar Ridge, Vermont, told I-Witness News on Tuesday March 10 that the family became concerned after they were told on March 3 that Robinson had not gone to Bentley’s home for any meals the previous day, March 2.

She said that a young man who lives with Robinson told her that they had not seen him since Sunday March 1, when he went to the mountains in Queensbury, Vermont.

Slater said the young man relayed certain information to her.

“Myself and him, we went down to the police station [in Penniston]. He was giving me a wording, which I will not disclose. Both of us went to the police station and I told the sergeant, ‘I understand that my brother is down here.’ And he (police officer) said, ‘No; nobody reported losing anything’,” Slater told I-Witness News.

She said she then visited the home of another of their sisters in Campden Park to see if Robinson was there, but he had not visited.

Slater said she went back to the police station and filed a missing person report, and the police then conducted a search.

On Wednesday, member of the Special Service Unit of the Police Force along with some of Robinson’s relatives also conducted a search, which also came up empty.

Slater said she had a “great relationship” with Robinson, her youngest brother.

She said she last saw him in Kingstown on Feb. 27.

He was sitting and she sneaked up and sat next to him, she told I-Witness News, adding that her brother asked for some of the soft drink she was drinking at the time.

“That was the last I heard from him; that the last thing I gave to him,” she said.

“All I can say, my brother was — he was,” she told I-Witness News as she broke down.

“I feel somebody has connection with the death of my brother. That’s how I feel,” she said after composing herself.

“I’m looking for justice for my brother. … My brother didn’t deserve to die like that,” she said.